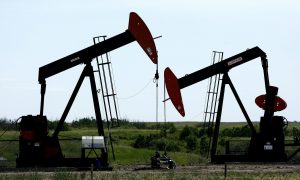 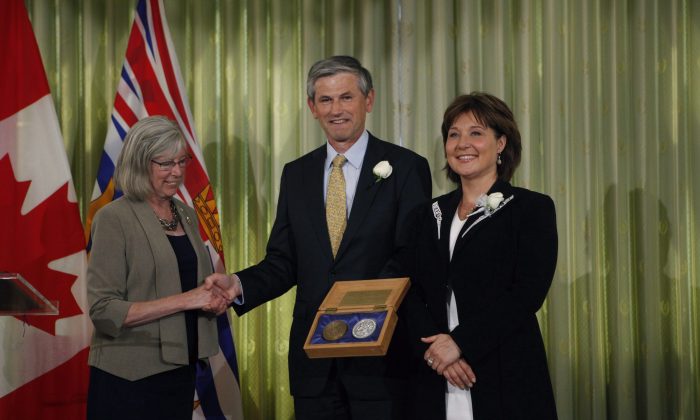 Premier Christy Clark (R) stands with Attorney General and Minister of Justice Andrew Wilkinson and Lieutenant-Governor Judith Guichon as Clark and the provincial cabinet are sworn in during a ceremony at Government House in Victoria on June 12, 2017. (The Canadian Press/Chad Hipolito)
Canada

VANCOUVER—Political observers across the country are paying special attention to the unique situation unfolding in British Columbia. The narrow election results have brought about an unexpected outcome that hasn’t happened here in six decades.

And although politicians are heading back to the B.C. legislature on June 22, experts warn that doesn’t mean the drama determining who will govern the province will be over.

Premier Christy Clark and her newly appointed 22-member cabinet were sworn in June 12, but the Liberals’ rule is expected to be short-lived. Clark is widely expected to lose a confidence vote in the house next week after the New Democrats and Greens came together to allow the NDP to form a minority government.

The first order of business for the parties is to pick a Speaker from their ranks. With the Liberals taking 43 seats in the house and a total of 44 NDP-Green MLAs sitting across from them, this won’t be an easy task.

Given the tight election result, the parties are reluctant to have one of their members take on the role of Speaker. All 43 Liberal MLAs have indicated they will not volunteer for the position. If the speaker comes from the NDP-Green alliance, the house gets deadlocked at 43 seats apiece with the Liberals.

“It’s going to be a matter of which party blinks first,” said Pauline Beange, an expert in Canadian politics and elections with the University of Toronto.

For a minority government that we are moving into one way or another in British Columbia, you need a good Speaker.
— Political science professor Allan Tupper

Beange said a snap election could result if the lieutenant-governor doesn’t see that a stable government can be established, but it would be in the parties’ best interest to carefully consider the consequences.

“I think both parties, however, will do everything to avoid another election because two of them very close together often annoys voters and parties can lose more seats, just as Theresa May did [in the British election],” she said.

On June 14, NDP Leader John Horgan and Green Leader Andrew Weaver floated the idea of having an Opposition member serve as Speaker, although if the Liberal government is defeated, political tradition dictates that the Speaker come from the government side of the house, which in this case would be a New Democrat.

Peter Woolstencroft, a political science professor at the University of Waterloo, said even though all the Liberal MLAs have refused to take on the position as Speaker, he wouldn’t be surprised if one of them decided to cross the floor in order to do just that.

“It may be that some Liberals, or even one, thinks the only way that they are going to get rid of Christy Clark is for her to be defeated [by a confidence vote],” Woolstencroft said.

If that happens, a leadership race would take place in the coming year.

However, experts say with this unusual minority government situation, the role of the Speaker takes on even more importance in that he or she has to hold to account what’s likely to be a very partisan legislature.

“For a minority government that we are moving into one way or another in British Columbia, you need a good Speaker,” said Allan Tupper, former head of the political science department at the University of British Columbia. “They need to be focused for the parliamentary procedure [to work] and, for a lot of reasons, to make a minority government work.”

Beange said considering that a lot more people are paying attention to politics in B.C. since the unusual election outcome, it’s good for the political system in general.

Horgan told reporters last week he was excited to see so many people asking questions about the parliamentary process in B.C.

But he didn’t disclose any strategy to address who will be elected as Speaker on June 22, only saying it could be anyone from any of the three parties. The procedure is conducted in private with all 87 MLAs casting a vote.

Whatever happens, it may be not be a long-lasting government, Woolstencroft noted.

“I don’t think this NDP and Green arrangement is going to last overly long,” he said, adding minority governments have a tendency to last less than a full term.