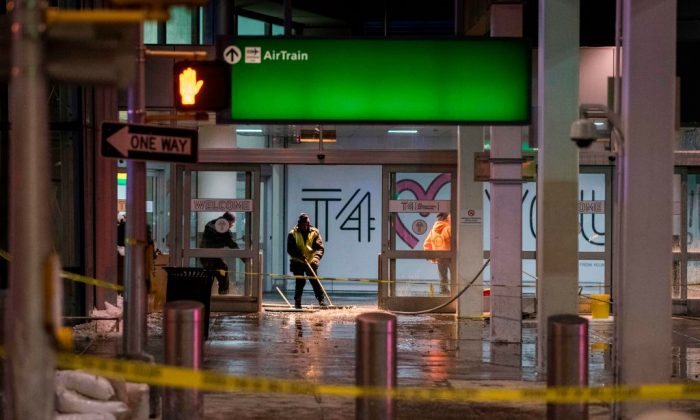 Workers sweep water from a floor of the arrivals area at John F. Kennedy International Airport's terminal 4, in New York on Jan. 7, 2018. International flights were suspended into a flooded terminal at New York's flagship airport on Sunday, flung into chaos after a water main broke during brutally cold temperatures following a deadly winter storm. Gushing water compounded meltdown at John F. Kennedy International Airport, where furious passengers have camped out for days as a result of equipment damaged by the storm and a backlog of flights. (Jewel Samad/AFP/Getty Images)
US News

Punches were thrown at JFK Airport in New York City over the weekend as huge delays left travelers stranded both at the airport and airports across the country while officials scurried to fix the problems.

The initial problem was a water main break. The break caused authorities to shut off power to affected areas, which led to crowded arrivals and departures in Terminal 4. At one point, arrivals were delayed for multiple hours.

“The storm caught us and now we have been stranded here for 13 hours,” one passenger, Carlos Koester of Brazil, told the New York Daily News.

Another passenger told the News that punches were thrown at one point.

“It seems as if some punches were thrown as people jostled,” Jeremy Silver said of the “near riot” at gate B23 when travelers learned of their canceled flight. “The crowd went nuts booing and shouting.”

Virgin Atlantic confirmed a “disturbance” happened that forced police officers to be called.

We are sharing a gate with another airline, and they have just cancelled there flight, causing the disturbance and the police being called. Our flight is operating and our teams are now moving our customers through the gate so they can board our aircraft. ^RM

“We are sharing a gate with another airline, and they have just canceled their flight, causing the disturbance and the police being called,” the airline tweeted just after midnight.

“Our flight is operating and our teams are now moving our customers through the gate so they can board our aircraft.”

“Never seen anything like this level of chaos,” Silver added.

Got caught up in the water main break at JFK. Thankful we got off plane & through customs (we were some of the last few)! Hoping for a quick clean-up/fix for those stuck!!!! pic.twitter.com/Ir2jSSpEpC

One Twitter user,  Stephanie Abrams, said in a video Sunday that passengers on her plane were among the last people allowed to go through customs.

She noted that the lights started to flicker and customs closed down almost immediately after they got through. “They shut it right after us,” she said. They were told they would not be getting their luggage.

A number of pictures shared across social media channels showed bags from baggage claim in three roped off areas.

I leave you with this last photo of JFK baggage claim (one of three roped off sections that look like this) pic.twitter.com/n9EUo6jLEo

While many people were stranded inside, others were in their planes on the tarmac for hours—some having arrived from elsewhere, some waiting to take off.

“Landed almost 4 hours back,” Derek Yach tweeted. “May deplane into buses but many planes are trapped unable to do so. We have no idea how long.”

Imogen Caird, who flew into the airport from Argentina, said the situation was grim.

“#JFK is an EMBARRASSMENT,” she wrote. “(Five) hours in the airport with no information regarding the status of our bags. There are pregnant women, babies and children on this flight. There is no toilet, food or water available. Disgraceful.”

While the situation at JFK unraveled, operations at the other area airports—Newark and LaGuardia—ran pretty much problem-free.