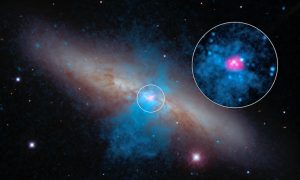 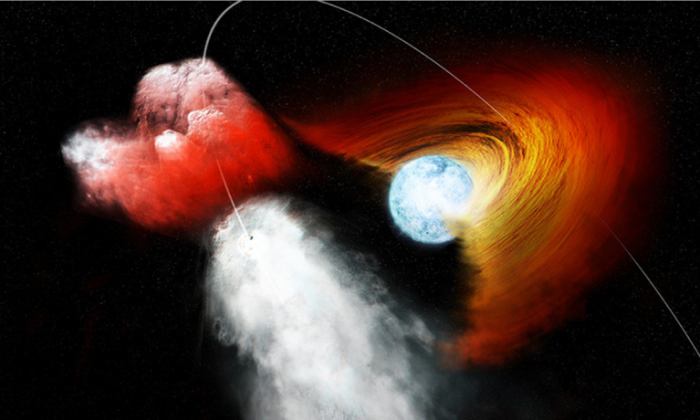 "As the pulsar moved through the disk, it appears that it punched a clump of material out and flung it away into space," says George Pavlov. (NASA/CXC/M.Weiss)
Science

A fast-moving pulsar appears to have punched a hole in a disk of gas around its companion star and to have launched a fragment of the disk outward at a speed of about 40 million miles per hour.

NASA’s Chandra X-ray Observatory is tracking this cosmic clump, which appears to be picking up speed as it moves out. The catapulted material weighs about as much as all the water in the Earth’s oceans.

The punch-out event happened in a double-star system that contains one star about 30 times as massive as the sun and another star that is a pulsar—an ultra-dense neutron star left behind after an even-more-massive star exploded as a supernova.

“These two objects are in an unusual cosmic arrangement and have given us a chance to witness something special,” said George Pavlov a senior scientist and professor of astronomy and astrophysics at Penn State and the lead author of a research paper that describes the discovery.

“As the pulsar moved through the disk, it appears that it punched a clump of material out and flung it away into space.”

The pulsar is emitting regular pulses as it spins 20 times a second. It is moving in a highly elliptical orbit around its companion star. The combination of the pulsar’s rapid rotation and its intense magnetic field has generated a strong wind of high-energy particles moving away from the pulsar at near the speed of light.

Meanwhile, the massive companion star in this two-star system (named PSR B1259-63/LS 2883, or B1259, for short) is rotating so fast that it is spinning off a disk of its own material. As the pulsar makes its closest approach to the star every 41 months, it passes through this disk.

“After this clump of stellar material was knocked out, the pulsar’s wind appears to have accelerated it, almost as if it had a rocket attached,” said coauthor Oleg Kargaltsev of George Washington University in Washington, DC. Even though the clump is rather large, spanning a hundred times the size of our solar system, it is also quite thin.

7 Percent the Speed of Light

Astronomers observed B1259, which is located about 7,500 light years from Earth, three times with Chandra between December 2011 and February 2014, and published their results recently in The Astrophysical Journal.

The X-ray emission observed by Chandra is likely produced by a shock wave created as the pulsar’s wind rams into the clump of material. The ram pressure generated by this interaction also could accelerate the clump.

The X-ray observations used in this study were carried out using Chandra’s Advanced CCD Imaging Spectrometer (ACIS). The principal investigator for this instrument is Gordon P. Garmire, professor emeritus of astronomy and astrophysics. Chandra will continue monitoring B1259 and its moving clump, with observations scheduled for later this year and in 2016.