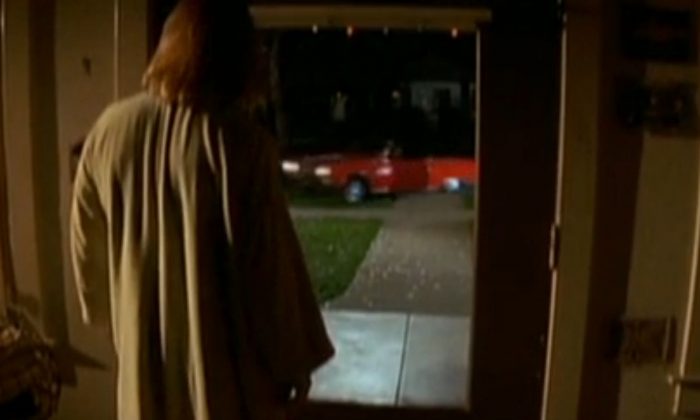 “Pulp Fiction” car recovered: The red Chevy in that was famously driven by John Travolta’s character, Vincent Vega, in “Pulp Fiction,” stolen nearly two decades ago, was recovered, it was reported.

The car had belonged to director Quentin Tarantino but disappeared without a trace in the early 1990s.

TMZ reported that last week, the car was found after police arrested a man suspected of classic car thefts. The man was arrested in Southern California and while he was not in possession of Tarantino’s car, a police investigation led to its discovery in Oakland, Calif.

Sources told the website that the car’s identification number was changed but it most assuredly once belonged to the film director.

Police are currently trying to communicate with Tarantino.

The man who was arrested will not be charged with stealing the vehicle.

In “Pulp Fiction,” Vega shuttles around Mia Wallace, played by Uma Thurman, and also shoots up heroin in the vehicle. Later, Vega drives the car onto his dealer’s lawn, demanding that he help deal with Wallace’s overdose.

In a late 2012 interview, he described his experience directing.

“I don’t want to be an old man directing. I think directors are like boxers. They need to know when to hang up the gloves. They need to know if I go any further now, even though I might like it, I’m going to start taking too many hits. I do think it’s a young man’s game, and if I survive 20 more years, look at that filmography, and pretty good so far, I say,” he told The New York Times.