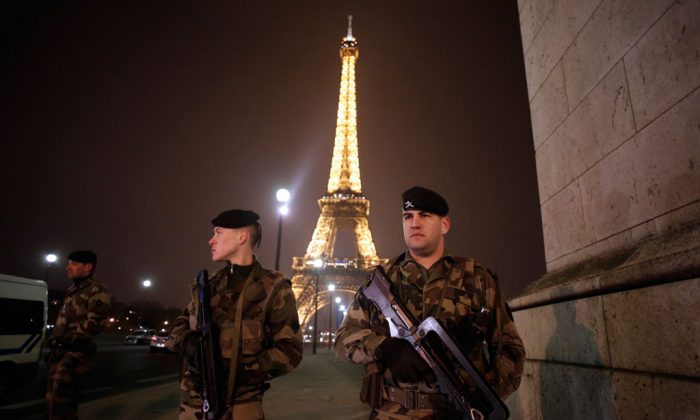 Police in Paris have massed at the site of the Pullman Hotel, according to witnesses. Meanwhile, police have evacuated the Champ de Mars, the area around the Eiffel Tower, located nearby the hotel. The Paris Metro station near the hotel was also shut down by police.

UPDATE at 4:16 p.m. ET – Police gave the “all clear” for the Pullman Hotel, and a cordon was lifted.

A French Interior Ministry spokesman told Reuters that the massing of police at the hotel was a false alert.

Witnesses said that armed police were going door-to-door at the hotel.

From a guest staying at the Pullman Hotel in #Paris. Stay safe. https://t.co/HheYAOAPk5

Harrigan at Pullman Hotel: “Police are now going room to room. We don’t know what’s behind this move.”#Paris @ANHQDC pic.twitter.com/4lRqLw9oEV

It comes just hours after a series of terrorist attacks left more than 120 people dead across the French capital city on Friday night.

A nearby subway station was closed, and many are reporting a large police presence reported at the Pullman Hotel, according to preliminary reports.

Update – Reuters: Witnesses say heavily armed police are at the site of the #Pullman Hotel near the Eiffel Tower

The Reuters news agency reported the police were on site at around 3:45 p.m. ET.

It’s unclear what is going on, or if the police presence is related to the terrorist attacks.

Reuters also reported that the Eiffel Tower was evacuated. The Pullman hotel is located near the tower.

Police in Belgium also arrested several suspects over the Paris attacks. They were arrested in Brussels, the capital of the country, AFP reported.  Prime Minister Charles Michel said the suspects were linked to “suspect vehicles” identified during the attacks.  The Islamic State of Iraq and Syria, or ISIS, claimed responsibility for the attacks. They said eight militants were involved.

“A case has immediately been opened linked to suspect vehicles in Paris, to check people linked to those vehicles. There have been several arrests,” Michel told RTL TV.

Belgium Justice Minister Koen Geens told the VRT network the arrests came after a car with Belgian license plates was spotted Friday night near the Bataclan concert hall, where  at least 89 people were killed by attackers armed with AK-47s and bombs.