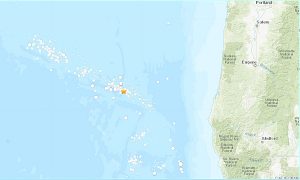 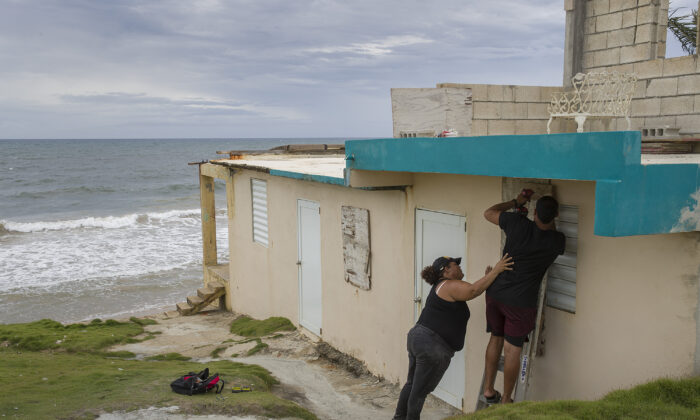 While Puerto Rico braced for impact from a tropical storm, the U.S. territory was hit by a 6.3-magnitude earthquake.

The National Weather Service said the epicenter of the quake was located about 44 miles north of the island. It added that neither Puerto Rico nor the neighboring U.S. Virgin Islands faced any threat of tsunamis.

PTWC: An earthquake with a preliminary magnitude of 6.3 occurred
44 miles north of PR at 11:24 PM AST. No tsunami threat exists for PR and the USVI. #prwx #usviwx

Yahaida Zabala, a 46-year-old San Juan resident, was asleep when she felt her building sway Monday around 11:23 p.m., according to The Associated Press.

“I rushed into my son’s room,” she said. “He was sitting like he was paralyzed.”

They ran down the stairs of their building and stood outside with a small group of people awaiting aftershocks.

Officials at NWS San Juan said that an aftershock with a magnitude of 5.1 struck 37 miles north of the island.

PTWC: An aftershock of a preliminary magnitud of 5.1 occurred 37 miles north of Puerto Rico at 11:33 PM AST. No tsunami threat exists. #prwx #usviwx

The U.S. Geological Survey said that over 20 aftershocks were noted in the hours following the initial quake, with at least seven of them registering at over 4.0 in magnitude.

Kiara Hernández, spokeswoman for the island’s Emergency Management Agency, told The Associated Press that there were no immediate reports of damage.

She said emergency management officials were already on alert for the approaching Tropical Depression Karen and communicated quickly with mayors and others across the island to check on any damage.

Forecasters said Tropical Storm Karen would unleash heavy rains across the northeastern Caribbean on Sept. 24 that could cause flooding and landslides. The regions affected are expected to be Puerto Rico and nearby islands.

Schools and government offices were already ordered closed in both Puerto Rico as well as in the U.S. and British Virgin Islands.

“We’ve had a number of these events now, and I know it’s like the little boy who cried wolf, but I’m urging the public to remain ever vigilant,” U.S. Virgin Islands Gov. Albert Bryan Jr. said.

“Heavy rains from Karen moving across the Virgin Islands, Culebra, and Vieques,” the NWS said in an advisory at 8 a.m. AST on Sept. 24.

A flash flood watch is in effect, the NWS said in a potential impacts announcement, adding that tropical force winds up to 40 mph, with gusts up to 50 mph, were expected Tuesday.

The agency warned residents to be on the watch for breaking waves of 8-12 feet, with occasional seas up to 14 feet, noting that this could result in “life-threatening rip current conditions, coastal flooding, and beach erosion.”

The National Guard also had been activated for the storm, and schools and government offices remained closed.