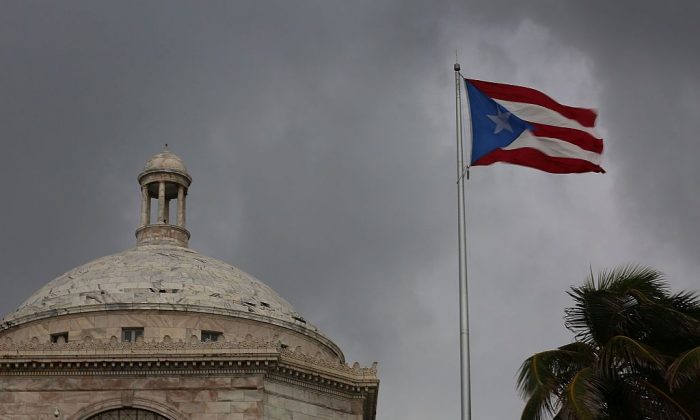 The Puerto Rican flag flies near the Capitol building as the island's residents deal with the government's $72 billion debt in San Juan, Puerto Rico, on July 1, 2015. (Joe Raedle/Getty Images)
Viewpoints

Puerto Rico Is Canary in Coalmine for States

5 lessons from the territory’s default

Puerto Rico’s tortuous path out of insolvency offers hard lessons for U.S. states piling on debt as if there were no tomorrow. Creditors counting on a federal bailout should brace for substantial haircuts.

Illinois and New Jersey have already been unable to meet pension obligations in recent years. Like the Puerto Rican commonwealth, U.S. states are ineligible for bankruptcy protections. Instead, Congress has to legislate a bankruptcy-like scheme into existence akin to the island’s Oversight, Management, and Economic Stability Act (PROMESA).

Even with PROMESA, the bumpy road is far from over for Puerto Rico and its creditors. On Jan. 13, the U.S. Supreme Court denied the latest petition from two insurance companies demanding the commonwealth keep paying its bonds during the restructuring, which began in 2016.

Prevention Is the Best Cure

One could have foreseen the crisis coming from a long way out. Puerto Rico entered an economic recession in 2006, following the phase-out of Operation Bootstrap, a tax-incentive program to attract manufacturers. What once encouraged businesses to move in disappeared, while regulatory burdens such as the Jones Act—banning foreign-flagged ships from transporting goods between the mainland and Puerto Rico—increased.

The 2008 financial crisis was the death blow. With falling revenues, the territorial government reacted by cutting staff and letting public agencies borrow from each other to pay back bonds. Unemployment increased, pushing more residents off the island.

Further, since citizens got used to growing benefits irrespective of the tax burden, politicos had few incentives to balance the budget—so they kept borrowing. Like clockwork, the debt load became unserviceable. By 2014, Puerto Rico was figuring out how to declare bankruptcy. Two years later, then-President Barack Obama and Congress came up with PROMESA. This was, however, just the start of new hurdles.

Puerto Rico has a total bonded debt of $74 billion and unfunded pension liabilities of $54.5 billion. The territorial government also owes around $15 billion to the water and electric utility authorities.

The legal journey began in May 2017, when the Oversight Board, established under PROMESA, filed a petition for financial relief. This allowed the commonwealth to suspend payments during the debt-restructuring process.

In the meantime, creditors challenged the bankruptcy scheme in court. In August 2017, two investment funds claimed the Oversight Board was unconstitutional because the U.S. Senate hadn’t confirmed its seven members.

The Puerto Rican electrical workers union also challenged the board. The union argued the board had illegally usurped the local government’s authority and reduced spending on education, medical care, and pensions.

Both lawsuits have made their way up to the U.S. Supreme Court, pending a decision that could put all relief efforts at risk. Nevertheless, the Oversight Board has pressed ahead and in September 2019 filed its major plan to restructure around half of the island’s bonded debt and most pension liabilities.

The plan, if green-lighted, would make bondholders the biggest losers: A few would get 93 percent of their claims, some 64 percent, and others just 35 percent. Further, those holding certain types of bonds issued between 2012 and 2014 would get nothing.

Retirees would get a better deal than most creditors. One reason is the Oversight Board claims the island needs to recover from the bankruptcy, so it plans to funnel as much money as possible to residents’ pockets. Thus, under the plan, the most generous pensions would get an 8.5 percent haircut, while the rest would remain intact. The board also intends to set up an independent trust to ensure benefit payments regardless of the island’s political or economic swings.

While this plan may boost spending on the island, creditors are taking note. If they’ll always get the short end of the stick, they’ll demand higher yields for future bonds.

Debt Restructuring Is Just the Beginning

Even with the significant relief, Puerto Rico’s liabilities will remain higher than the average U.S. state debt. In other words, the fundamental way out must come from sound finances and economic policies, not shirking contracts.

Natalie Jaresko, the board’s executive director, explained that besides debt relief, the board is pushing the local government to become more efficient and attract businesses. Moreover, it aims to cut Puerto Rico’s debt to a level the local economy can afford. Jaresko’s perspective is spot on: Restructuring the debt, even if it prevails in court, isn’t a long-term solution.

To avoid sliding back into insolvency, the commonwealth should “keep debt service flat,” according to economist Brad Setser, a senior fellow with the Council on Foreign Relations.

The island’s case might appear distinct—given the double whammy of natural disasters and population decline—but the states are similarly vulnerable. Puerto Rico still hasn’t recovered from the devastating Hurricane Maria in 2017, and two earthquakes have hit in 2020.

Puerto Rico’s exodus is no surprise, considering the stagnating economy and high unemployment rate. Around 40 percent of residents live in poverty—more than double the rate of the poorest U.S. state, Mississippi. According to Lyman Stone, an economist with the U.S. Department of Agriculture, Puerto Rico will continue to lose residents until at least 2030.

Capital markets have shunned the commonwealth, and any attempts to release new debt would be costly.

Recovering international confidence after insolvency is hard, as Argentina can attest. The South American nation of 44 million people has yet to recover from its 2001 default and legal battles with creditors. Investors don’t trust reckless administrations and demand high premiums to lend funds.

To overcome bankruptcy and get back on its feet, Puerto Rico must do the exact opposite of Argentina; even creditworthiness will be many years in the making. The island must streamline the welfare state and regain trust from both residents and businesses. Political leaders, in turn, must resist the temptation to expand handouts for patronage.

Investors will eventually update their expectations in the aftermath of Puerto Rico’s default. While Argentina doesn’t have the backing of the world’s most powerful government, U.S. states should remember the bottom line: There’s no substitute for a healthy private sector to spur economic growth, garner tax revenues, and create jobs.