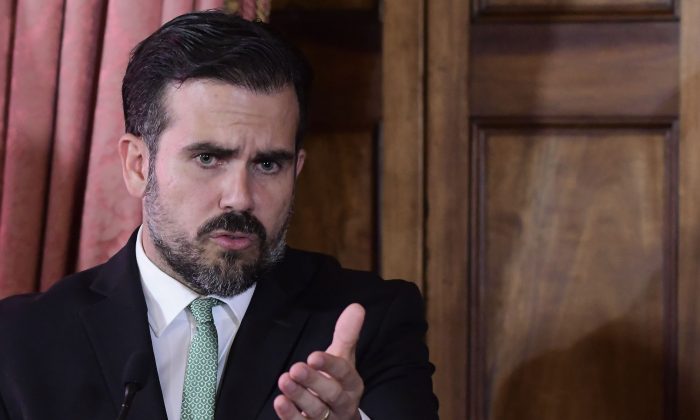 Puerto Rico’s embattled governor says he will not seek re-election but will not resign as the island’s leader, though he will step down as head of his pro-statehood party.

Ricardo Rosselló made the announcement on Sunday, July 21, via a brief Facebook video as hundreds of viewers posted angry messages. He also said he is looking forward to facing the process of impeachment, whose initial stages have begun in Puerto Rico’s legislature.

“A huge portion of the population is unhappy and I recognize it,” Rosselló said on Facebook Live. “I’ve heard you, I love the island and people. … Today I have the responsibility to direct my strengths to try to find alternatives so that with God we may be able to move forward.”

“I’m going to be looking forward to turning over power to the person elected democratically,” he said.

Rosselló is two and a half years into his four-year term.

Rosselló is facing public furor over an obscenity-laced online chat that showed the governor and his close advisers insulting women and mocking constituents, including victims of Hurricane Maria.

Rosselló apologized late Thursday, July 11, for profanity-laced comments he made in a private chat to describe a former New York City female government official and a federal control board overseeing the island’s finances.

Rosselló said he was working 18-hour days and releasing tensions when he called former New York City Council Speaker Melissa Mark-Viverito the Spanish word for “whore” and in English told the board “go [expletive] yourself” followed by a string of emojis with the middle finger raised.

The comments drew the ire of many Puerto Ricans who said they were ashamed of his language and of how this might affect the reputation of the U.S. territory, which had already come under scrutiny earlier this week with the arrests of former government officials including the island’s education secretary.

Rosselló posted a lengthy statement on Twitter that read in part, “A person who uses that language against a woman, whether a public figure or not, should not govern Puerto Rico …this type of behavior is completely unacceptable.”