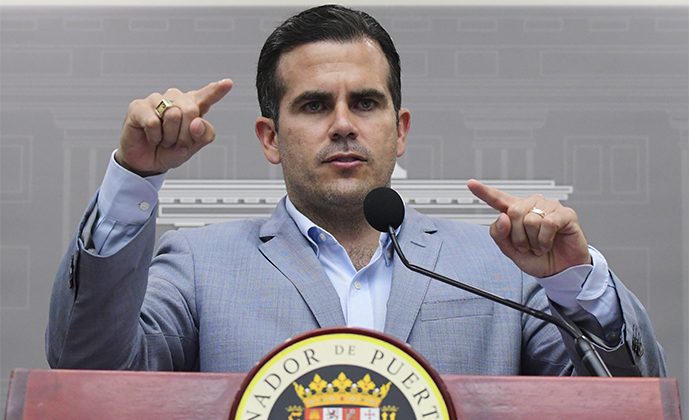 Puerto Rico Gov. Ricardo Rossello during a press conference regarding the number of estimated deaths in the aftermath of Hurricane Maria, in San Juan, Puerto Rico, Aug. 28, 2018. (Carlos Giusti/AP Photo)
US News

Puerto Rico Governor Says He Is Resigning After Weeks of Protests

Puerto Rico governor Ricardo Rosselló says he is resigning on July 24 after weeks of protests over what he says is due to leaked obscene, misogynistic online chats.

Rosselló said his resignation will be effective on Aug. 2.

The 40-year-old is the first governor to resign in the modern history of Puerto Rico, a territory of 3.2 million U.S. citizens that is mired in a 13-year recession and still recovering from the Category 4 hurricane two years ago.

Tens of Thousands of Puerto Ricans Demand the Governor Resign

Public outrage over the leaked chats and federal corruption charges against former government officials sparked massive demonstrations across San Juan in the largest protest movement on the island since Puerto Ricans successfully marched to demand an end to U.S. Navy military training on the island of Vieques more than 15 years ago.

“We would drive out Wanda Gonzalez as well,” Rosa said. “We want new elections.”

But Rosa is nevertheless optimistic about Rosselló stepping down.

“This is a historic moment,” Rosa said. “People have developed a new political awareness and become more knowledgeable about their power and ability to bring about change.”

Puerto Rico’s governor apologized late Thursday, July 11, for profanity-laced comments he made in a private chat to describe a former New York City female government official and a federal control board overseeing the island’s finances.

Rosselló said he was working 18-hour days and releasing tensions when he called former New York City Council Speaker Melissa Mark-Viverito the Spanish word for “whore” and in English told the board “go [expletive] yourself” followed by a string of emojis with the middle finger raised.

The comments drew the ire of many Puerto Ricans who said they were ashamed of his language and of how this might affect the reputation of the U.S. territory, which had already come under scrutiny with the arrests of former government officials including the island’s education secretary.

Rosselló said he had not yet spoken to Mark-Viverito, who posted a lengthy statement on Twitter that read in part, “A person who uses that language against a woman, whether a public figure or not, should not govern Puerto Rico …this type of behavior is completely unacceptable.”

Officials said there was no evidence that Keleher or Ávila-Marrero had personally benefited from the scheme.

“I am ashamed to have to listen to the allegations that have been made against former public officials,” Rosselló said. “It is simply unacceptable, it is unprecedented what our people have had to go through.”

Earlier Thursday evening, a group of protesters had gathered at Puerto Rico’s main international airport to receive Rosselló as he cut a European vacation short to address the arrests and the leaked chat. The protesters then traveled to the governor’s seaside mansion where Rosselló spoke late Thursday and demanded his resignation.

“He’s not a person of worth to be governing Puerto Rico,” said Vanesa Contreras, one of the protesters. “We deserve better.”

Rosselló said he would not resign and that he was focused on implementing anti-corruption measures, although he did not provide details.