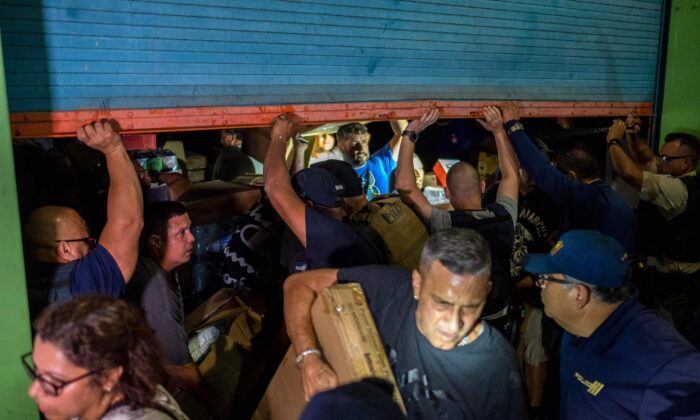 Police arrive as people break into a warehouse filled with supplies in Ponce, Puerto Rico, on Jan. 18, 2020. (Ricardo Arduengo/AFP/Getty Images)
US News

The governor of Puerto Rico fired the island’s emergency manager after the discovery of a warehouse full of disaster aid supplies dating back to Hurricane Maria in 2017.

“There are thousands of people who have made sacrifices to help those in the south, and it is unforgivable that resources were kept in the warehouse,” the governor said in a statement.

The items—found when the building was inspected after an earthquake hit Puerto Rico last week—included water, food, diapers, baby formula, cots, and tarps, according to ABC News.

At an estimated cost of $90 billion, Hurricane Maria is the third costliest on record and, with over 2,900 casualties, was 2017’s deadliest storm, according to NOAA.

Garced said in a statement that agents from the Special Investigations Bureau would look into the matter, adding that she expected the investigation to produce findings and recommendations within 48 hours.

Acevedo has denied allegations that the supplies were improperly handled, saying the agency has been actively distributing supplies, according to a statement.

“It is important to emphasize that no citizen has been denied any of the items found at this place,” he said, ABC reported.

Prior to the governor making the announcement, an angry group of citizens broke into the warehouse to access the supplies, The Independent reported.

Ponce Mayor Mayita Meléndez wrote on Twitter that the city and its government “had NO knowledge of the findings made in this warehouse near the Guancha de Ponce.” Meléndez said the warehouses weren’t under city management.

“Our people suffered greatly bc of how Hurricane María was managed,” she wrote. “We cannot allow history to repeat itself.”

In the wake of the scandal, the governor of Puerto Rico promised decisive steps to root out corruption among Puerto Rican authorities.

“I will continue taking firm, affirmative action, always putting the welfare of the people first. Whoever is unable to meet the standards of transparency and diligence—you will NOT have a place in the government,” she said in a statement.

President Donald Trump’s son Donald Trump Jr. shared news coverage of the apparently mishandled aid on Twitter: “So Trump was right after all!!! As usual.”

The comment is an apparent reference to statements made by Trump regarding misuse of aid by Puerto Rico authorities and, more generally, the widespread corruption in the country.

Trump on Jan. 16, 2020, called the island “one of the most corrupt places on earth” and denounced its leaders as either “incompetent or corrupt,” in the context of discussions around setting conditions for the provision of aid to the earthquake-stricken region.

On Jan. 15, the Trump administration imposed dozens of new conditions on the government of Puerto Rico to access $8.3 billion in delayed recovery funds for Hurricanes Irma and Maria in 2017. A day later, Trump declared a major disaster on the island, boosting aid to Puerto Rico.

Trump’s declaration of a major disaster in Puerto Rico makes federal funding available for repairs, temporary housing, and low-cost loans “to help individuals and business owners recover from the effects of the disaster,” the White House said.

News of the apparently mishandled supplies upset many Puerto Ricans, who were already angry over the government’s botched response to Hurricane Maria, with similar incidents of supplies going unused and being uncovered months later.

Ponce is one of several cities in the island’s southern region hit by the recent 6.4 magnitude earthquake that killed one person and is estimated to have caused more than $200 million in damage. More than 7,000 people remain in shelters since the quake.