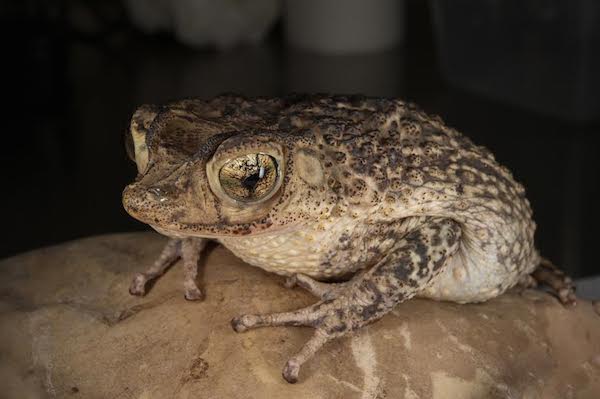 The Puerto Rican crested toad (Peltophryne lemur) has had a miraculous journey. Once common on the islands of Puerto Rico and Virgin Gorda, its population declined by more than 80 percent over the past decade, leaving behind just some 200 individuals in the wild. These few individuals are now known only from a handful of locations in Puerto Rico.

The toads were even thought to have gone extinct from 1931, until a small population was rediscovered in 1966. But researchers have turned their fate around. Since 1992, they have successfully bred in captivity and re-introduced to the wild more than 300,000 of these threatened toads.

In October of this year, for instance, researchers from the toad’s Species Survival Plan (SSP) of the American Zoo and Aquarium Association (AZA), released captively bred tadpoles to six sites in north and south Puerto Rico.

“Many species such as the Puerto Rican Crested Toad are declining and will not persist in the wild without ex situ conservation action, such as captive breeding, until threats in the wild can be mitigated or resolved,” Diane Barber, Coordinator of the SSP, the AZA Amphibian Taxon Advisory Group Chair and Curator of Ectotherms at the Fort Worth Zoo, told mongabay.com.

The island of Puerto Rico suffered extensive deforestation that reduced its forest cover to less than six percent by the 1940s. But many areas cleared for agriculture and sugar plantations that eventually became unproductive began undergoing natural regeneration, and by 2003, Puerto Rico’s forest cover increased to 53 percent. As of 2012, about 64 percent of the island of Puerto Rico is under natural or planted tree cover, according to the Food and Agriculture Organization.

However, less than one percent of the forests today are the island’s original primary forests. Moreover, the regenerated vegetation differs considerably from the original forest cover before deforestation, and a significant portion of the island is now covered by coffee plantations. Between 2001 and 2012, Puerto Rico experienced about 13,000 hectares of tree cover loss, according to the Global Forest Watch—although some of this loss may be due to plantation harvesting.

Much of the terrestrial fauna on the island have been introduced by people. Some of these include cats, dogs, mongoose, and several species of ants, birds, amphibians and reptiles. But the Puerto Rico also boasts of a number of endemic species found only on the island, such as the Critically Endangered Puerto Rican parrot, whose population in the wild was reduced to about 13 individuals by 1970s largely due to habitat destruction. The bird is now being bred in captivity and released into the wild. The Puerto Rican crested toad, like the Puerto Rican parrot, is on its path to recovery.

Currently listed as Critically Endangered by the IUCN Red List, Puerto Rican crested toads were once divided into two distinct populations, one in the north coast and the other in the south coast of Puerto Rico. Since 1992, however, no toad has been recorded in the northern coast, where they are now thought to be extinct. The last extant wild population of the toads, according to the IUCN Red List, lies within the Guanica National Forest in southern Puerto Rico.

In 1984, the AZA created the Species Survival Plan to save the Puerto Rican Crested Toads from extinction, the first of its kind for an amphibian. Captive breeding and reintroduction of tadpoles to ponds in the wild became one of the most important goals of the plan.

Currently, sixteen AZA institutions participate in the toads’ breeding efforts every year, according to Barber. Each toad at these breeding centers is individually identifiable and their ancestry in the wild tracked. The toads are paired and bred to ensure the captively bred population maintains the highest possible genetic diversity.

The resulting tadpoles are then sent to sites within the toads’ historic habitat, and are not mixed with the remaining wild population, Barber said.

But successful captive breeding of an endangered species such as the Puerto Rican crested toad is not easy. It involves a lot of tricks, Scott Silver, Facility Director and Curator of Animals at the Wildlife Conservation Society’s Queens Zoo, told mongabay.com. WCS’s Queens Zoo breeds the Puerto Rican Crested Toads as part of the AZA, and has successfully raised tadpoles for the toads’ recovery program for the first time this year.

“We estimate we raised and released approximately 2,400 tadpoles,” Silver said.

To ensure successful breeding in captivity, conditions at the breeding enclosures are adjusted to mimic conditions in the wild. For instance, since the toads breed during the rainy season in the wild, enclosures at the Queens Zoo are equipped with misting chambers, according to WCS’s press release. Researchers also play the toads’ breeding calls to encourage courtship and mating. Hormones are also used to induce the toads to lay eggs, to fertilize them within a short time frame, and provide enough offspring for reintroduction efforts, Barber said.

“We currently breed the toads for six different releases per year,” she said. “Typically three to four institutions will attempt to breed for each release and normally at least two to three will be successful. The breeding process from start to finish typically takes three months and is coordinated so everyone is sending the tadpoles to Puerto Rico at the same time.”

Currently, there are six release sites in Puerto Rico for the toads. Two of these are on properties managed by the Puerto Rico Department of Natural and Environmental Resources, and four are on lands privately managed by non-profit groups, Barber said.

“We released at all six sites in 2014,” she added. “Three of our sites are new enough that reintroduced toads are not mature enough to return to breed (an indicator of success), but the tadpoles metamorphosed and dispersed naturally after the events and have survived/been observed 1-2 years after release (another indicator of success). We have had good survivorship and breeding events at our ‘older’ sites, but population numbers are unknown due to the difficulty of being able to census/monitor this cryptic species outside of major breeding events.”

The main threats to Puerto Rican crested toads in the past have been habitat loss, as well as competition with introduced species of toad such as the giant cane toad that sugarcane farmers imported from South America to eat pests attacking sugarcane. These existing threats need to be addressed for reintroduction of the toads into the wild to be truly successful.

“We continuously monitor our reintroduction sites and land managers eradicate predators such as the marine toad and mongoose,” Barber said “Enclosures are put up around the reintroduction ponds to keep dragon fly larvae from consuming the tadpoles and also keep out marine toads and birds. Reintroduction sites are placed in protected, managed areas where the toads will have room to disperse within karst [limestone] habitat.”

While there is still a long way to go for Puerto Rico’s only native toad, success of the AZA’s captive-breeding program offers some hope.

“If the Puerto Rican Crested Toad goes extinct, so would any hope we have of discovering any other unique, interesting or beneficial characteristics they may possess,” Silver said. “That is a loss we always have when a species goes extinct. We lose the chance to learn, and we lose something that the world has had for thousands and thousands of years.”

Editor’s note: A previous version of this article mentioned sugar cane plantations cover a significant portion of Puerto Rico. However, a source informed us that while sugar cane was cultivated intensively in decades past, it’s currently grown on just approximately 500 hectares of the island.