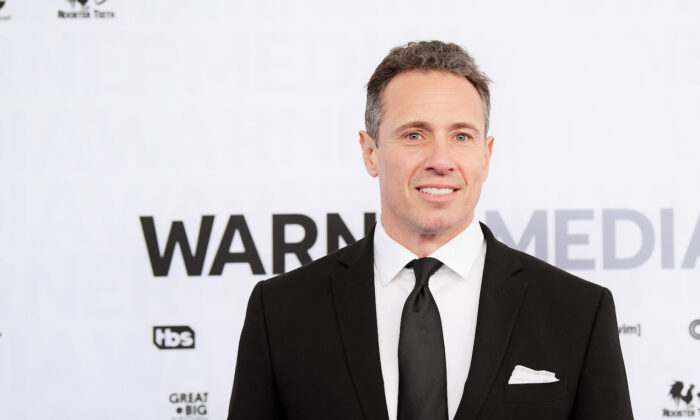 Chris Cuomo at the WarnerMedia Upfront 2019 arrivals on the red carpet at The Theater at Madison Square Garden in New York City, on May 15, 2019. (Dimitrios Kambouris/Getty Images for WarnerMedia)
Media & Big Tech

A planned book by former CNN anchor Chris Cuomo has been canceled after he was terminated by the network after reports alleged he privately helped his brother, then-Gov. Andrew Cuomo, publicly respond to sexual harassment allegations last year.

A spokesperson for HarperCollins subsidiary Custom House told news outlets that it won’t release Cuomo’s book, “Deep Denial,” which was slated for release in the fall of 2022.

A Custom House spokesperson told The Associated Press and People magazine Tuesday that it will not release the book, which was described as Cuomo’s attempt at a “provocative analysis of the harsh truths that the pandemic and Trump years have exposed about America.”

There was no immediate comment from a representative for Cuomo.

Just days after he was suspended, CNN terminated Cuomo’s employment on Saturday after records that were publicly released by the New York Attorney General’s office indicated that he allegedly worked to defend his older brother to a greater extent than what was previously known.

In a statement on Sunday, a spokesman for Cuomo told the Wall Street Journal that CNN executive Jeff Zucker allegedly had intricate knowledge of Cuomo’s efforts in defending his brother. CNN, in a responding statement, described those claims as false.

“There were no secrets about this, as other individuals besides Mr. Cuomo can attest,” a Cuomo spokesman told the paper, while claiming that both Cuomo and Zucker “were widely known to be extremely close and in regular contact, including about the details of Mr. Cuomo’s support for his brother.”

But CNN responded by claiming that Cuomo recently “has made a number of accusations that are patently false,” and those statements merely “[reinforce] why he was terminated for violating our standards and practices, as well as his lack of candor.”

Meanwhile, Cuomo confirmed Monday that he will no longer host his SiriusXM, “Let’s Get After It,” citing the recent events.

“The way my time ended at CNN was hard. While I have a thick skin, I also have a family, for whom the past week has been extraordinarily difficult. So, right now, I have to take a step back and focus on what comes next. That means I will no longer be doing my SiriusXM radio show,” Cuomo said in a statement posted on social media.

After his termination from CNN, Cuomo separately wrote that “this is not how I want my time at CNN to end, but I have already told you why and how I helped my brother.”

Andrew Cuomo resigned as New York’s governor in August. He has categorically denied allegations that he acted inappropriately towards staffers.