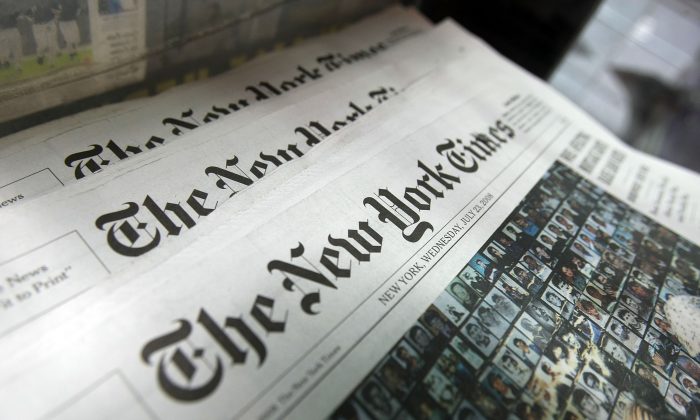 Copies of the New York Times sit for sale in a rack July 23, 2008 in New York City. (Mario Tama/Getty Images)
US

A conservative book publisher has announced it is cutting ties with the New York Times, citing data that shows how the Times’ best-seller list is not an accurate representation of actual book sales.

The Times has been criticized for ranking best-sellers like Dinesh D’Souza’s “The Big Lie: Exposing the Nazi Roots of the American Left” well below other books with half the number of sales according to figures from Nielsen BookScan that are based on actual sales from major retailers.

According to its Sept. 4 press release, Regnery Publishing, which is the U.S.’s premiere conservative book publisher, contends that the Times is rigging its best-seller list.

Marji Ross, president and publisher of Regnery Publishing, wrote in a letter to authors and colleagues that this rigging has resulted in a list of rankings that is “less reflective of which books are actually selling best in the country, regardless of one’s political persuasion.”

Ross stated, “It appears that the Times has gathered book sale data in a manner which prioritizes liberal themed books over conservative books and authors.”

The New York Times has long been accused of supporting a left-leaning stance through its best-seller lists.

D’Souza’s top seller, in which he contends fascism is a left-wing ideology that has been falsely labeled extreme right, is just one of the titles Regnery said is disadvantaged by the Times’ listing.

Regnery points to another of its titles, “No Go Zones: How Sharia Law is Coming to a Neighborhood Near You,” which it said has also been ranked lower on the Times list than in BookScan figures.

How does the Times (NYT) bias work?

Regnery alleges that the NYT’s best-seller list for the week of Sept. 3 misrepresented the popularity of its title “The Big Lie: Exposing the Nazi Roots of the American Left,” that was published on July 31. The NYT list ranked D’Souza’s book No. 7 of 15 titles despite the book consistently selling at either No. 1 or No. 2 over the last four weeks, according to Nielsen BookScan total sales data.

D’Souza told World Net Daily that this has meant he had sold around 10,000 books weekly since its recent publication. However, according to the NYT’s list rankings, titles with sales around 5,000 per week somehow record higher sales.

“This, I think, is a real violation of trust,” he continued.

Ross said on behalf of the publisher, “We refuse to continue to highlight a list, which has an increasingly diminished value to our audience. Therefore, we will no longer promote, publicize, or frankly even bother to mention this list.”

Regnery said its books will no longer carry the ‘NYT best-seller’ banner on their covers, and it will look elsewhere for marketing and publicity. This means that its authors will not be able to claim the title of “New York Times best-selling author”—a big deal in the book business.

But Regnery’s position is clear. It will not continue to promote a list that does not accurately represent the values and sales of its conservative titles.

Instead, Regnery will look to other widely published best-seller lists to determine the success of its authors.

The publisher said it will use Publishers Weekly list as its benchmark, and track sales through Nielsen BookScan figure that count print sales in stores representing about 85 percent of the market, according to AP. The Times said its list is based on surveys of thousands of booksellers.