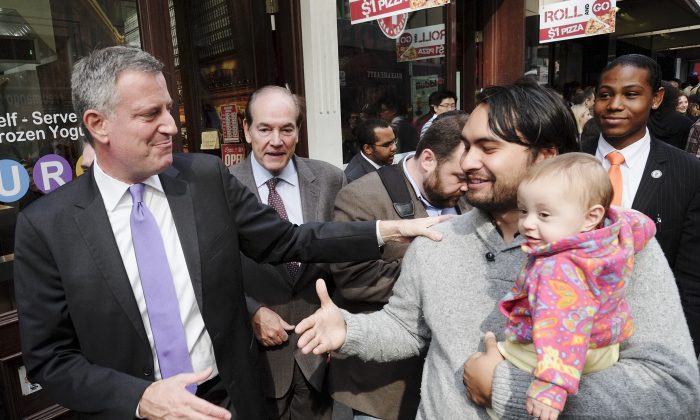 NEW YORK—Two reports supported by Fast Food Forward and a coalition of community groups and labor unions raise the bar in a national campaign to unionize fast food workers and raise wages.

Labor organizers Fast Food Forward commissioned UC Berkeley and the University of Illinois Urbana-Champaign to study how much money fast-food workers on public assistance are costing the country.

“This is about people being educated,” said Kendall Fells, a campaign manager at Fast Food Forward.

Raising broader awareness and engaging public support for a fast-food worker wage increase is a key element of the strategy.

“Companies are sensitive to their brand, particularly in fast food where the franchise branch really does depend very much on brand recognition and brand popularity,” said Jack Temple, who spoke on a conference call with reporters Oct. 15. Temple is a policy analyst at NELP, and the author of the NELP report.

At the rally, Public Advocate Bill de Blasio, who is also a mayoral candidate, said the city ought to be able to raise the minimum wage. He also pledged his support to help fast-food workers “organize to get even better wages and benefits.”

Fells said the movement has seen impressive growth, with more and more workers getting involved around the country. He added the coalition of groups supporting fast-food workers want more New York State and federal politicians to get involved.

He said the movement is growing in numbers and strength, and expanding to more cities. “The mushroom is going to become a lot bigger in the next six months, and eventually the industry will not have a choice but to come to the table and negotiate with these workers.”

Fells said he expects the movement to continue swelling and pressuring the fast-food industry bosses until workers get what they want.

“These workers will not stop until they get $15 dollars and a union contract,” said Fells.