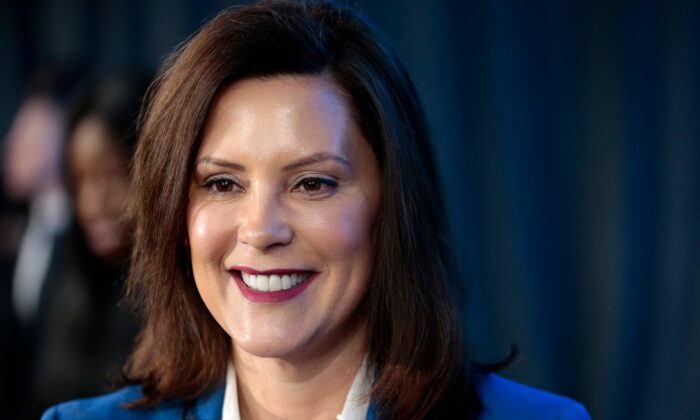 “Whitmer is a career politician using our money to buy her reelection and to pay off her political supporters,” Roe said.

“With $3 billion allocated for direct pay to workers in the form of bonuses, wage increases, and raises for so many that risked their own safety through the pandemic, the Michigan AFL-CIO is committed to stand shoulder with Governor Whitmer in advocating for Hero Pay,” Bieber said.

“Hero Pay” is a proposed payment from the state to an unspecified array of school employees, first responders, health care employees, and other “frontline workers.”

The $500 million line item doesn’t specify exactly who would receive the payment, nor does it specify the amount each recipient would receive.

John Cakmakci, president of Local 951 of the United Food and Commercial Workers union, believes that his workers will be among those receiving “Hero Pay.”

Cakmakci said his grocery store workers “showed up every day from the beginning of this pandemic to make sure Michigan families had the food supplies they needed,” and “they deserve to be acknowledged and rewarded for their efforts.”

State Superintendent of Schools Michael Rice said, “The budget will improve our children’s educational experiences … and will strengthen public education by providing $4,000 to every school staff member over a two-year period and help to hire and train thousands of new teachers.”

“Educator retention” means bonuses, salary increases, and other incentives for teachers and other school employees to stay at their posts. The proposed budget raises the annual per-pupil state aid allocation from $8,700 to $9,135.

“Governor Whitmer’s bold plan is the most transformational investment in public education we have seen in decades. … Her plan will make a real difference in recruiting, retaining, and respecting educators to help every student succeed,” said Paula Herbart, president of the Michigan Education Association, the state’s largest teachers union.

“Investing in retention is the smartest use of tax dollars to support law enforcement,” Rob Figurski, president of the Michigan Association of Police Organizations, said. “Keeping experienced officers in the profession needs to be our collective priority.”

The green agenda also loomed large in Whitmer’s budget, with the state government proposing to pay a $2,000 point-of-sale rebate to anyone purchasing an electric vehicle. The state would also pay a $500 rebate toward the purchase of at-home charging equipment for new or used electric vehicles.

“Michigan’s economy needs the governor to rein in spending and come up with ideas other than growing state government by throwing money at our problems,” said Eric Ventimiglia, a spokesperson for the conservative political group Michigan Rising Action.

Ventimiglia also said increases in state education spending should be tied to commitments that the districts would remain open.

The Whitmer budget proposal calls for “rolling back” the state’s unpopular retirement tax and for raising the Michigan Earned Income Tax Credit.

The budget projects a $20 billion surplus due to higher-than-expected tax revenues and a flood of federal COVID-19 relief dollars. State Budget Director Christopher Harkins views the surplus as a “unique opportunity to transform our state for years to come.”