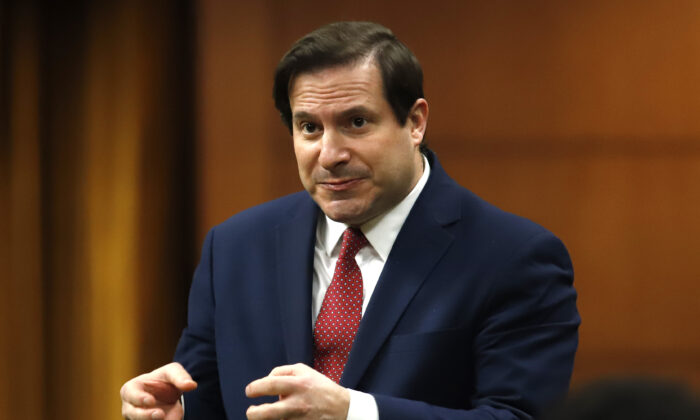 Public Safety Minister Marco Mendicino provided few details when questioned on Aug. 8 about his knowledge of the RCMP’s use of spyware technology capable of remote installation and surveillance on Canadians’ personal devices.

Appearing before the House of Commons Committee on Access to Information, Privacy and Ethics, Mendicino was hesitant to give direct answers to questions about the RCMP’s possible circumvention of obtaining warrants necessary to use the technology, and about the agency’s lack of transparency with Canada’s Privacy Commissioner, Philippe Dufresne, in using the software.

Testifying ahead of Mendicino, Dufresne said he was unaware of the RCMP’s use of the spyware until he learned about it from the media. He further said that prior to implementing the software the agency did not consult with him about possible privacy infringements the software could pose for Canadians.

“It is unfortunate that the privacy commissioner has reported that he learned about the use of this particular investigative technique in the media,” Mendicino said.

“That is something that I have discussed with the RCMP, and I’m pleased to report … that they are now actively engaged with the privacy commissioner to ensure that the use of this technique … is consistent with the charter.”

Responding to Mendicino, NDP committee member Matthew Green said that the Liberal government doesn’t seem to foster “a culture of transparency and openness by default,” and that agencies like the RCMP should cooperate more with the privacy commissioner.

“This is now the third situation which I think could have been avoided on committee, quite frankly, if these agencies had gone on the record and pursued—with full engagement and full cooperation—privacy impact assessments,” Green said.

Mendicino also didn’t answer directly when questioned about his knowledge of whether the RCMP made use of legal loopholes allowing them to circumvent the “normal judicial processes” of obtaining a superior court judge’s warrant before using the spyware technology.

“These techniques, if and when they are used, are always done in a manner that is consistent with the law and the charter,” he said.

The committee had earlier requested RCMP Commissioner Brenda Lucki to provide “a list of warrants or any other information” pertaining to federal police using the spyware to monitor MPs. Lucki refused, saying in an Aug. 4 letter: “This information will not be provided by the RCMP.”

“A committee of Parliament has unfettered powers to request documents,” said Kelly, according to Blacklock’s Reporter. “Just a blanket refusal to a committee is troubling.”

Several committee members went on to ask Mendicino if he would support legislation making privacy impact assessments (PIAs) a legal requirement for agencies like the RCMP before they can use special investigative techniques that could infringe on the privacy of Canadians.

Mendicino replied that “there are already a number of mechanisms [in place] that assure transparency,” but that the government “should always be open to having a conversation on how [it] can raise the bar.”

Mendicino summarized by saying he “hopes” the RCMP is committed to building transparency and the trust of Canadian citizens.

“I hope—I think—that the RCMP understands and shares our point of view about the importance of transparency and the importance of working alongside all institutions. which exist to protect Canadians’ charter rights,” he said.

The RCMP said in a statement on June 22 that it used the spyware in 10 “targeted investigations” between 2018 and 2020 and only after having received warrants from superior court judges allowing them to do so.

However, Global News reported on Aug. 8 that, in documents filed with the committee that day, RCMP Commissioner Brenda Lucki said the agency has used the spyware in 32 investigations since 2017 on a total of 49 individual devices.

Lucki said the spyware’s use “is always targeted, time-limited, and never to conduct unwarranted or mass surveillance.”