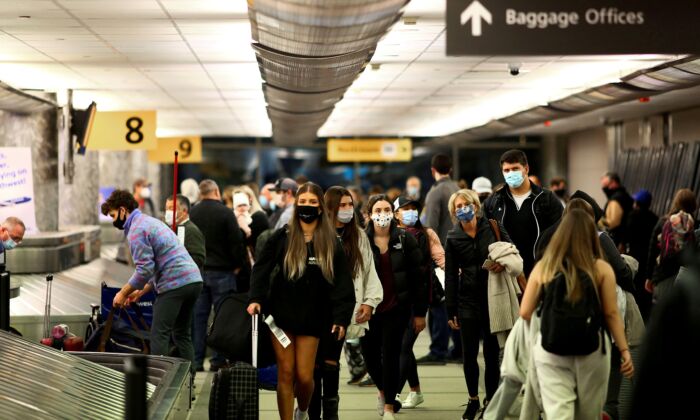 Travelers wearing face masks reclaim their luggage at the airport in Denver, Colorado, on Nov. 24, 2020. (Kevin Mohatt/Reuters)
US News

A Colorado county health department has backed away, for now, from a plan to create what has been described as a de-facto vaccine passport system.

The Larimer County Board of Health announced Oct. 21 that it had made its decision to pause implementation of the plan, “based on the feedback and questions we received” from the public.

The voluntary plan is called the Vaccine Verified Facility and Event Program (VVFE).

It asks businesses, churches, and other venues, to post a sign on the door stating proof of vaccination is required of all individuals seeking to enter the premises.

The plan is an accompaniment to a strict mask mandate imposed by the health board on Oct. 15 that requires all people, aged more than 3 years old, to wear a mask indoors in public places, regardless of vaccination status.

According to health officials, the mask mandate and VVFE proposal are tools designed to blunt a recent spike in COVID-19 infections.

Larimer County is currently in the high-risk category of community transmission, as outlined by the Centers for Disease Control and Prevention (CDC).

Health department spokesperson Kori Wilford said September was the third deadliest month of the pandemic for Larimer County with 24 deaths.

Since the pandemic began in the spring of 2020, 318 Larimer County residents have perished from CCP (Chinese Communist Party) virus, commonly known as the novel coronavirus. Forty two percent were 85 years old or older.

Reluctance to take the shot and pushback over mask mandates have made news for months in Larimer County, where 35 percent of its 360,000 people have not been vaccinated.

An activist organization called Real Freedom 77, last week celebrated the health board’s backing away from the Nov. 1 start date of the VVFE program in an online posting.

The group, which strongly opposes vaccine mandates, credited the pause to the flood of emails and other contacts received by the health department from people opposing the program.

The posting urges citizens to “be kind and polite,” to health board members, while keeping the pressure on until the program is “cancelled and taken completely off the table.”

Vicki Sutter, founder of the pro-liberty Christian citizens’ group Winsome Ministries, said the proposals were “a vaccine passport plan going by another name.”

“I believe the health department intends to use the stringent mask mandate as leverage to push more people to be vaccinated. It’s more about control than public health.”

Wilford told The Epoch Times that under the plan, if a participating business reaches a 95 percent vaccination rate among its employees, and all of their customers who can show proof of vaccination, do not have to wear a mask while indoors in that venue.

Sutter views this as incentivizing businesses to ban unvaccinated customers, and as an attempt to “perpetuate a state of emergency” mentality.

“It will create division and mutual resentment. It will pit one group against the other. We all need to put faith over fear.

“Posters banning the unvaccinated are already being seen in some businesses. We are encouraging people to only shop at freedom-loving stores,” she said.

Wilford acknowledged that some businesses and venues have already been asking customers for proof of vaccination upon entering.

“They are doing so on their own. I emphasize, the program is not being implemented. We are not ordering them to do it.

“We heard the public’s concern. That VVFE portion was removed from the Oct. 20 Public Health Order that put the new county-wide, universal, mask mandate in place.

“We felt the plan would give businesses that wanted to do a vaccination requirement an opportunity to be exempt from it.”

Wilford stated that the area’s Intensive Care Units (ICUs) were at 119 percent capacity, resulting in the doubling-up of people in rooms, and the transferring of patients to other hospitals.

“This is not just affecting COVID patients, but also people needing critical care for other reasons. They are being sent to distant hospitals.”

Wilford said half of the ICU patients were there because of the virus, and that the burden on Larimer hospitals was being driven by treatment of the unvaccinated.

“We certainly did not want to do an order mandating universal mask wearing, but every parameter has heated up in the last few weeks.

“The sole reason we did what we did is to relieve the overload of our hospitals,” said Wilford.

“We are not shooting for a 100 percent vaccination rate, but 80 percent would go a long way to slow down the pandemic.”