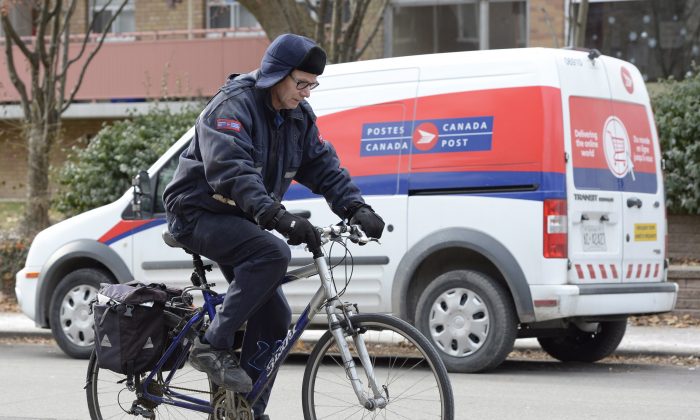 A postal worker rides past a Canada Post van in Toronto on Wednesday, Dec. 11, 2013. The Crown corporation's plans to phase out home delivery have faced sharp criticism but Gwyn Morgan argues the move reflects economic realities, as does the need to convert defined benefit pension plans. (The Canadian Press/Frank Gunn)
Opinion

Canada Post’s recent disclosure of a $6.5 billion pension fund shortfall left the federal government with no practical choice but to support the crown corporation’s plan to provide less service at higher rates.

Pouring in public funds to bail out a gold-plated pension beyond the wildest dreams of the vast majority of taxpayers would have been politically toxic. Canada Post’s inflation-indexed, defined benefits plan guarantees up to 70 percent of employment earnings starting as early as age 55, but it’s far from the only gold-plated government employee pension plan. And although Canada Post’s unfunded pension liability is huge, it pales in comparison to the combined unfunded liabilities faced by federal, provincial, and municipal governments across the country.

The Canadian Federation of Independent Business (CFIB) estimates that, “Based on evidence from Statistics Canada, Public Accounts and other sources, the unfunded shortfall for public pension plans across the country likely exceeds $300 billion. That works out to $9,000 for every man, woman and child in Canada.” Despite their staggering size, these taxpayer liabilities rarely make headlines. That’s why the CFIB calls them “Canada’s hidden unfunded public sector pension liabilities”.

But they won’t go unnoticed much longer. As increasing numbers of public employees retire, billions of dollars must be added to government budgets to pay their annual pension payouts. And lower birth rates combined with baby-boomer retirements mean that those rising costs will fall upon the shoulders of a decreasing number of working Canadians. The vast majority of those saddled with that $300 billion public service pension liability are private sector workers, two-thirds of whom don’t have any kind of employer pension plan.

That public sector employees enjoy vastly more generous retirement benefits than the taxpayers who pay for them is already fomenting rising resentment. Such pension provisions are a legacy of monopoly public sector unions extracting ever-more extravagant benefits from strike-fearing governments.

Meanwhile, private sector employees who do have pensions are seeing their defined-benefit plans converted to “defined contribution,” whereby the size of payouts depends upon the accumulated value of invested funds. Unlike taxpayer funded public sector monopolies, competitive pressures, combined with a substantial drop in the returns available to invested funds, has made conversion to this no-deficit “pay-as-you-go” system an economic reality for most private sector businesses. And given the unfathomable $300 billion legacy the current structure has left the next generation of working Canadians, it’s also the route that government pensions must take.

But even if all government pensions were converted tomorrow, so long as the defined benefit entitlements of existing beneficiaries are considered sacrosanct it would take decades for the conversion to make a difference. And it certainly won’t happen any time soon. Even changes affecting only future employees have been fiercely resisted by public sector unions.

But the status quo is no longer an option as escalating pension costs divert more and more funding from such financially-stressed social programs as healthcare and education. Governments must be prepared to defy union resistance by all available means, including back-to-work legislation and imposed settlements that actually recognize fiscal realities.

But the most potent tool available is the reduction of union monopoly power through private sector contracting of public services. Such resolute actions have the support of an ever-increasing number of Canadians who are fed up with seeing their hard-earned tax dollars spent on extravagant public sector benefits. Union leaders will protest loudly, but the reality is that they have used strike threats to vastly overreach what taxpayers can or will fund. And, given the public mood, their threats may just increase voter support for dramatic change.

Democracy is, no doubt, the best of all governance systems. But its major flaw is that “long-term thinking” tends to equal the length of time left until the next election. This has led to excessive concessions to public service unions and a “kick the can down the road” attitude towards funding pension liabilities. Like any other problem, it gets worse the longer it is ignored. And ignoring this problem is soon to become the least viable political option.

Gwyn Morgan is a retired Canadian business leader who has been a director of five global corporations.