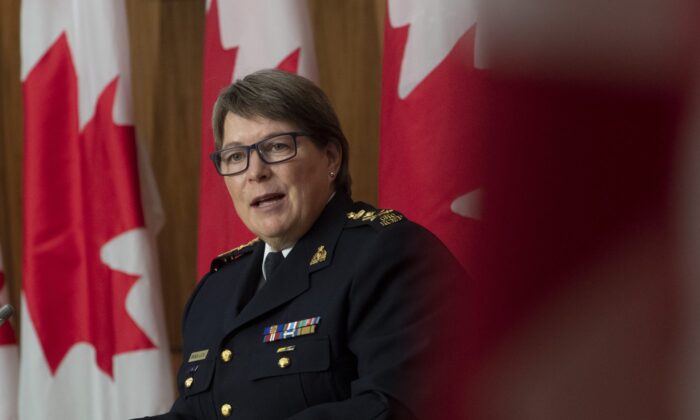 The information revealed this week that alleges political interference in the Nova Scotia mass shooting probe in April 2020 was initially withheld by the Department of Justice, says the public inquiry investigating the tragedy.

The Mass Casualty Commission (MCC) released documents on June 21 about the public communications of the RCMP and the government after the shooting that left 22 people dead.

Contained therein are the notes of RCMP Superintendent Darren Campbell, which allege that RCMP Commissioner Brenda Lucki wanted the information about the types of firearms used in the attack to be released to fulfill a promise made to the public safety minister and the Prime Minister’s Office (PMO).

The government was about to ban 1,500 firearms it describes as “assault-style.”

The MCC also revealed this week that Campbell’s notes initially sent by the Department of Justice did not contain the section about alleged interference in the investigation.

“The Mass Casualty Commission did not receive both versions of Supt. Darren Campbell’s handwritten notes at the same time,” said investigations director Barbara McLean in an email statement.

McLean said the Commission issued a subpoena in June 2021 to the RCMP’s H Division (Nova Scotia) for all material on the investigation.

The MCC received documents from the Department of Justice in February that contained the notes of senior RCMP officers, including those of Campbell.

On May 31, the MCC says it received another disclosure of Campbell’s notes for the same period, this time containing 136 pages.

“The Commission sought an explanation from the Department of Justice about why four pages were missing from the original disclosure of Supt. Campbell’s notes,” said McLean.

It also seeks to know if anything else has been withheld.

“The Commission is seeking assurance that nothing else has been held back as per direction from subpoenas.”

McLean said the MCC has so far received thousands of documents from the RCMP, but notes they have “often been provided in a disjointed manner that has required extensive Commission team review.”

The Department of Justice told The Epoch Times it needed to further assess the four pages of Campbell’s notes before releasing them.

“Department of Justice counsel produced to the Commission a package of over 2,000 pages of notes from senior officers on February 11, 2022, and March 2, 2022. Some pages of those notes, including the four pages of the notes of Supt. Campbell, required further assessment of whether they were privileged,” wrote Justice spokesperson Ian McLeod in a statement.

“That review was completed and it was determined that the pages were not privileged.”

McLeod said his department did not advise the MCC the four pages were being reviewed for privilege and “should have done so.”

Campbell’s handwritten notes have been released, but many parts have been redacted with markings such as “Irrelevant,” “Irrelevant Personal Information,” and “Solicitor-Client Privilege.”

The key section that was missing starts on page 49 and relates to a conference call on April 28, 2020, held between H Division personnel, including Campbell, and the RCMP National Headquarters with Commissioner Lucki.

This is where Campbell wrote that Lucki was putting pressure for the firearms types to be released to the public to fulfill a promise made to the government.

Campbell says he pushed back to not “jeopardize” the investigation.

“The commissioner went on at length saying that she was ‘sad, disappointed’ and that we disrespected her by not providing these details to the media,” wrote Campbell.

“The commissioner said that she had promised the minister of public safety and the Prime Minister’s Office that the RCMP (we) would release this information.”

When Campbell again told Lucki the information could not be released, he wrote that “the commissioner then said that we didn’t understand, that this was tied to pending gun control legislation that would make officers & public safer by or through this legislation.”

Lucki has denied in a statement interfering in the investigation, but she has not directly disputed the claim that she asked for the information on firearms to be released.

Her statement did corroborate other notes taken by Campbell, which say that due to Lucki’s intervention, “some in the room were reduced to tears & were emotional over this belittling reprimand.”

“I regret the way I approached the meeting and the impact it had on those in attendance,” Lucki wrote.

Prime Minister Justin Trudeau said on June 23 from Rwanda that his government “did not put any undue influence or pressure” on the investigation.

Minister of Emergency Preparedness Bill Blair, who also had the public safety portfolio in April 2020, also said as much.

“At no point did our government pressure or interfere with the operational decisions of the RCMP,” Blair said in the House of Commons on June 22.

The House of Commons committee on public safety will hold hearings with some of the stakeholders in the coming weeks.

The MCC should also hear testimony from Supt. Campbell in the near future.