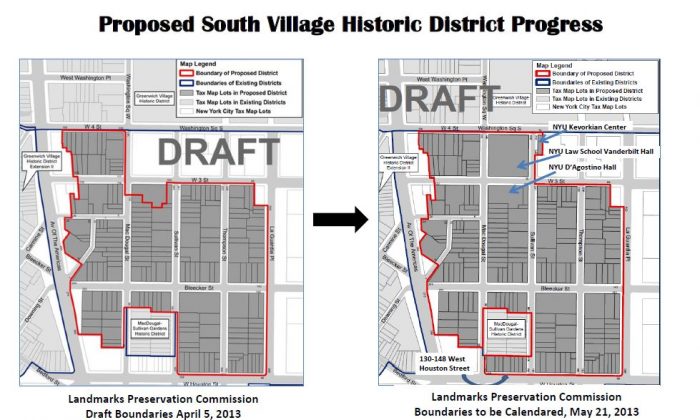 NEW YORK—The New York City Landmarks Preservation Commission voted on May 21 to approve a public hearing for a proposal to expand the South Village historic district.

The public hearing will kick off the process to designate the area as a historic district, a proposal first made by the Greenwich Village Society for Historic Preservation (GVSHP) in 2006.

The boundaries in the expanded district contain 13 significant buildings that were excluded in the city draft boundaries, which were released in April.

The GVSHP pushed back to include the excluded buildings with a concerted campaign to add houses back into the district, including a row of houses built in the 1840’s and several New York University Buildings.

“[The buildings] are not only inextricably linked to the history and development of the South Village, but their exclusion could lead to jarringly out-of-character new development,” stated Andrew Berman, executive director of the GVSHP, in a press release.

“This is especially so in the case of NYU’s Vanderbilt Hall, where the university easily could—and no doubt one day would, if allowed—build a 300-foot-tall tower right on Washington Square Park,” Berman added.

The City promised to vote on the expanded district as part of a deal to rezone nearby Hudson Square. The public hearing is scheduled for June 25.