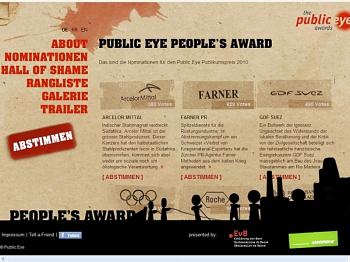 Renate Lilge-Stoedieck
View profile
Follow
biggersmaller
Print
The global Swiss pharmaceutical company Hoffmann-La Roche has a strong lead in votes for the Cynicism Award—given to the international player that had the most shady ethical practices in the global business environment in 2009.

The annual “Public Eye People's Award" is conferred by the Swiss organization Berne Declaration and the Swiss Division of Greenpeace. From Jan. 14 to Jan. 27 www.publiceye.ch is accepting votes for international irresponsibility. The award was set up as a critical counterpoint to the annual meeting of the World Economic Forum (WEF), taking place in Davos, Switzerland, Jan. 27-31. The winner will be announced on Jan. 27 when voting closes.

Roche has collected approximately 50 percent more votes than its closest competitor for conducting medical studies in China on about 300 transplant patients. They have not been able to account for the origin of the organs. Roche markets the medicine Cell Cept in China, which prevents the rejection of transplanted organs, despite China’s unethical transplant practices.

According to Huang Jeifu, China's vice health minister, more than 90 percent of all transplanted organs in China are harvested from executed prisoners. This practice is considered unethical under international conventional due to the impossibility of obtaining prisoners’ consent.

The United Nations Committee Against Torture (UNCAT) is deeply concerned that organs are harvested from prisoners of conscience, particularly practitioners of the spiritual practice Falun Gong. UNCAT has requested the Chinese regime to allow an independent investigation into the allegations. For the past 10 years, Falun Gong adherents have been persecuted by the Chinese state, being sent to re-education, concentration, and forced labor camps without proper legal proceedings. Many have died as a result of torture.