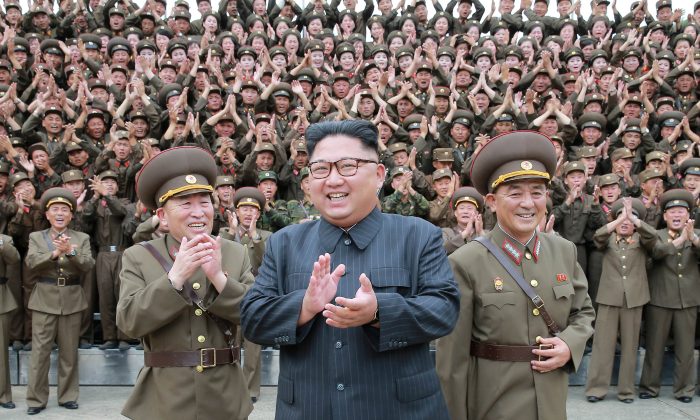 North Korean leader Kim Jong Un with military officers at the Command of the Strategic Force of the Korean People's Army (KPA) in an unknown location in North Korea on August 15, 2017. (KCNA/via Reuters)
By Simon Veazey

Even top military brass live in constant fear in North Korea, said a defector who describes execution by anti-aircraft guns, and how top earners supplement meager wages (40 cents a month) with huge bribes.

Hee Yeon, who grew up amid Pyongyang’s elite, said that schoolgirls were handpicked to become servants and sex slaves for the communist leader Kim Jong Un.

“Despite our privilege we were scared. I saw terrible things in Pyongyang,” Hee (a pseudonym) Yeon told the Mirror from the safety of South Korea, where she had recently escaped to.

She described being forced to watch a public execution of 11 musicians accused of creating pornography.

The daughter of a high-ranking military official, Hee said she witnessed the execution from just 200 feet away, together with 10,000 other people.

“The musicians were brought out, tied up, hooded and apparently gagged, so they could not make a noise, not beg for mercy or even scream,” she said.

“They were lashed to the end of anti-aircraft guns,” she said. “A gun was fired, the noise was deafening, absolutely terrifying, and the guns were fired one after the other.”

“The musicians just disappeared each time the guns were fired into them. Their bodies were blown to bits,” she added.

Public executions, alongside torture, forced labor, and arbitrary arrest are used to maintain an environment of fear and control, according to the a 2017 report by Human Rights Watch.

“The government practices collective punishment for alleged anti-state offenses, effectively enslaving hundreds of thousands of citizens, including children, in prison camps and other detention facilities,” said the report.

There are reports of executions in schoolyards.

“Everybody in Pyongyang openly supports Kim Jong Un because they would be killed if they didn’t,” she said.

Living in a high-ranking military family, she enjoyed the comforts of a three bedroom home. Like many officials, her father supplemented his 40-cent-a-month wage with bribes.

However, despite being so meager, her father’s wage is a rarity in the communist regime. According to Human Rights Watch, “ordinary North Korean workers, both men and unmarried women, are required to work at government-assigned enterprises. Although they are theoretically entitled to a salary, they usually are not compensated.”

A U.N. report states that 41 percent of people in North Korea are undernourished and 70 percent rely on food assistance.

In comparison, Kim lives a lavish lifestyle, dining on caviar and living in exclusive sanctuaries with swimming pools, beautiful gardens and fountains, according to Hee.

She said that officials came to the schools and picked out teenage girls for Kim.

“They take the prettiest and ensure they have straight, good legs.

“They learn to serve him food like caviar and extremely rare delicacies. They are also taught how to massage him and they become sex slaves,” she said.

North Koreans are brought up with state propaganda that elevates its leader to an almost god-like status.

That illusion was shattered when she met Kim at the large-scale events, she said. “I found him terrifying, really scary, nothing god-like about him.”

Kim inherited the communist dictatorship, when his father, Kim Jong Ill died in 2011. Under Kim Jong Un, the country’s nuclear ambitions have progressed, with the sixth nuclear test in September this year.

Kim has threatened to launch a missile at the U.S. territory of Guam, with some analysts saying that it may already be able to reach the U.S. mainland with a nuclear missile.

But Kim is ratcheting up the prospect of war not from a position of power, but because of his own sense of insecurity, said Hee.

“Kim Jong Un threatens war because he feels cornered and has no escape,” she said.