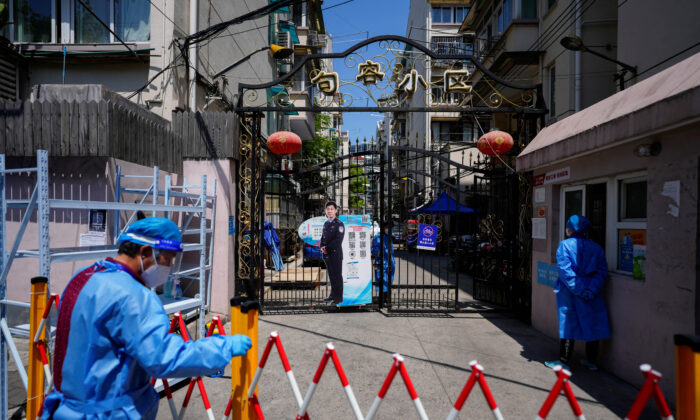 The closed entrance of a residential area is pictured during the lockdown in Shanghai, China, on May 5, 2022. (Aly Song/Reuters)
Thinking About China

Public Discontent Grows Over Shanghai’s Lockdown—Is It a Spark That Starts a Revolution?

There is some hope that protests over heavy-handed lockdowns might spark a revolution, but there is mixed evidence that Shanghai lockdown protests will be that spark.

In Xi Jinping and his regime’s quest to show the world they can control COVID-19, they have locked down dozens of cities and almost 400 million people. But none has been more contentious than the one in Shanghai. It has always been a cosmopolitan city with a large foreign contingent. That large number of foreigners often meant that as far back as the 1920s and especially during the early days of World War II in the Battle of Shanghai, the city has attracted Western attention.

In this case, it means foreign correspondents report about the heavy-handed lockdowns. Entire populations of high-rise apartments have been forcefully relocated to COVID camps if a single case is found in their building. Residents have been stuck with inconsistent supplies of poor quality and no access to medical care. They are so disappointed that residents post their complaints on social media quicker than the censors can remove them. And videos have emerged of residents arguing and struggling against officials and police officers.

This has led to a central question, and even hope among Chinese dissidents and analysts in the West: is this some sort of catalyst for the beginning of the end for the Chinese Communist Party (CCP)?

As Mao Zedong famously said, “A single spark can start a prairie fire.” And the classical Chinese works beyond Sunzi (Sun-Tzu) are replete with references to a regime that loses favor with the people being undermined. As I’ve explained, legalist scholars, like Han Feizi and Lord Shang, believed in a strong government that could compel people. But they failed to account for the idea that they could only compel bodies, and the minds would resist such a naked use of power.

The phrase “hearts and minds” is often mocked in today’s circles, but it was a powerful component of Confucian ideology, and formed part of the ruling ideology called Imperial Confucianism.

The Han Dynasty text, “The Huainanzi,” discussed the fall of China’s first dynasty, the Qin. It was so powerful that there wasn’t a place where people walked that wasn’t a part of its empire. Yet the revolt of a single soldier caused the dynasty to collapse because of the accumulated grievances, as outlined below from the ancient text:

“Chen Sheng, a conscript soldier, arose. … He bared his right arm and raised it, proclaiming himself Great chuh, and the empire responded like an echo. At that time, he did not have strong armor or sharp weapons, powerful bows or hard spears. They cut date trees to make spears; they ground awls and chisels to make swords, they sharpened bamboo and shouldered hoes to meet keen halberds and strong crossbows, yet not city they attacked or land they invaded did not surrender to them. They roiled and shook, overran and rolled up an area of several thousand square li. … Chen’s force and station were supremely lowly, and his weapons and equipment were of no advantage, yet one man sang out and the empire harmonized with him. This was because resentment had accumulated among the people.”

In short, the CCP appears powerful, and the people don’t have weapons or even access to an uncensored internet. But it is likely the people seethe with resentment. Classical writers and even Mao himself agreed that it only takes a small spark for that resentment to turn into a revolution.

Yet that doesn’t mean the regime will fall as a result of the lockdowns. The CCP has experienced a fair number of protests that have fizzled out. Unfortunately, these failed protests and continuing oppression of the Uyghurs often gives CCP officials a chance to hone their skills in quelling the disturbance and shifting blame. In this case, the central government can simply blame local authorities for improperly applying Xi’s directives.

No one knows the future but there is evidence of a recession in China, and plenty of evidence from history that suggests rough times ahead for the country and the brutal communist regime. Regimes seemingly more powerful than Xi’s throughout history have suddenly fallen. The fall of the Berlin Wall to the mighty Qin Dynasty attest to this.

But there is also some recent history that suggests that the public discontent over COVID lockdowns may not be the spark that starts a prairie fire. Sadly, the CCP is very skilled at snuffing out discontent and shifting the blame. Only time will tell, but Americans must continue to stand for freedom and human rights, including the human rights of the citizens under a horrible dictatorship.