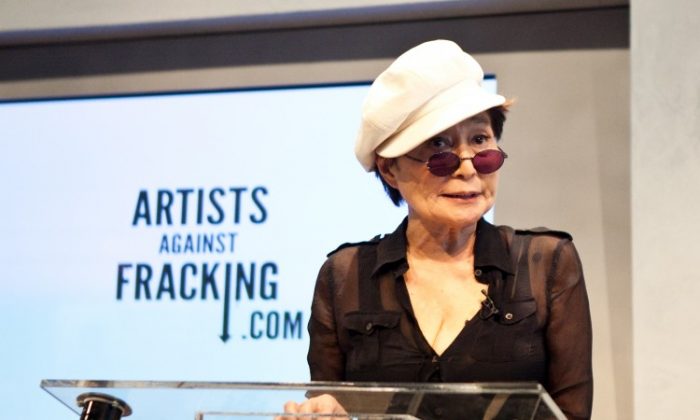 Yoko Ono, wife of the late John Lennon, speaks in Manhattan earlier this year during the launch of Artists Against Fracking, an activist partnership project opposed to hydraulic fracking. (Amal Chen/The Epoch Times)
US

Like the proposed regulations released in 2011, the revised 2012 regulations, known as a Supplemental Generic Environmental Impact Statement (SGEIS), are a dense, highly technical volume of text. No list of changes made between the regulations from 2011 and these new regulations are included in the document and no record of the 2011regulations can be found on the DEC website to compare.

The DEC said it will not make any final decisions until Dr. Shah’s public health review is made.
“If DEC decides that hydraulic fracturing cannot be safely done in New York, these regulations will not have any practical effect and the process will not go forward,” the DEC website said. “If DEC decides that the process can be done safely, these regulations would be adjusted in accordance with the health and safety requirements and issues addressed in the Supplemental Generic Environmental Impact Statement.”

Artists Against Fracking, an anti-fracking advocacy group headed by Yoko Ono and Sean Lennon that wants to see fracking banned in New York state, opened a video competition, which will be aired as a paid advertisement in New York City and Albany. The contest ends Jan. 30, 2013, well past the deadline for public comment.

Winners also get a lunch with Ono and Lennon, the wife and son of the late John Lennon, in New York City.

Through the contest, called #Don’tFrackNHY, the group hopes to educate the public—including Gov. Andrew Cuomo—of the risks they feel are associated with fracking.
“The #DontFrackNY video contest is about empowering creative people and agencies to help protect our health, air, water, beautiful rural areas, and climate from fracking,” said Lennon in a statement.