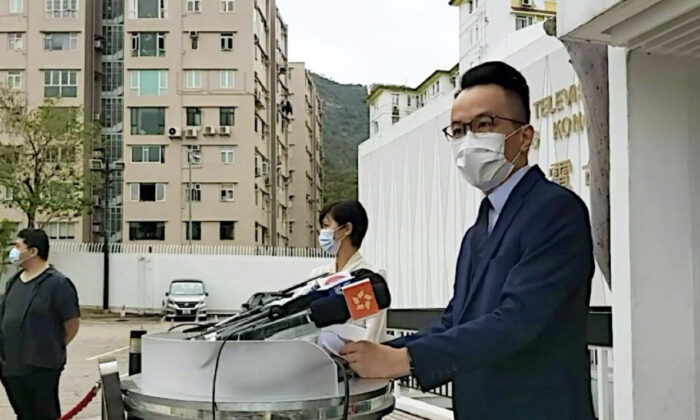 The most notable in the recent changes at HKgov is Patrick Li Pak-Chuen, who purged RTHK as the new Secretary of Security Bureau of Hong Kong. (Photo by Stand News)
HK Current Affairs

The Hong Kong government recently announced a new round of switching of their upper management, including the appointment of Patrick Li Pak-chuen, Director of Broadcasting, as the new Permanent Secretary of the Security Bureau. As Director of Broadcasting Li had been accused by analysts of turning Radio and Television of Hong Kong (RTHK) into state media and a government mouthpiece, and now have concerns as to what actions he might take in his new position.

From scholars’ analysis, the only reason why Patrick Li got the job is that he has been compliant enough to carry out the government orders without question.

Patrick Li Pak-chuen began his new post on July 1, 2022, as the Permanent Secretary of the Security Bureau. Since March 2021, Li had been working as the Director of Broadcasting and was responsible for major changes to RTHK.

When examining the governmental musical chairs, Dr. Benson Wong Wai-kwok, scholar and former assistant professor at the Department of Politics and International Relations at the Baptist University of Hong Kong, shared his thoughts on the “governmental wheel of fortune.”

Dr.Wong, who has been living in the UK since August 2021, but is still speaking out for Hongkongers, believed that Patrick Li was only being transferred to continue his compliant work at RTHK, to a different department for the Hong Kong Liaison Office, as well as that of the Chief Executive Elect John Lee Ka-chiu.

Dr. Wong said, what’s more important is whether the bottom line of political ethics and neutrality has been completely erased, as senior government officials are executing political tasks for the regime. The landing of Li meant the death of RTHK, stricter censorship, and suspension of programs with which the powerful disagreed.

After Li took office as the Director of Broadcasting back in March 2021, he immediately set up an editorial committee to censor productions of RTHK programs.

The kill-list included programs such as award-winning Hong Kong Connection, This Week, and Hong Kong Story. These programs were required to be approved by Li, before going on air.

Li at the time stated, “All production teams should submit a detailed proposal for the committee’s review before filming.”

Li was also supervising the entire production process to ensure the final products would come out, aligned as they were proposed.

Employees at RTHK began quitting, being made redundant, or being fired after the appointment of Patrick Li Pak-chuen as the Director of Broadcasting.

One of the most memorable former employees of RTHK was a beloved talk-show host and former Assistant Programme Officer at RTHK, Nabela Qoser. Qoser became the hot target of the government after she had asked, the then Chief Executive Carrie Lam, “to speak like a human being,” at a press conference during the 2019 anti-extradition movement.

At the time since Patrick Li Pak-chuen took office from March to May of 2021, RTHK reported a total of 18 civil servant departures. Half of them were resignations.

Many other talk-show hosts, guest hosts, producers were also terminated during Li’s term at RTHK.

Multiple contracted workers of the production team of Hong Kong Connection, were told not to return to work.

Lee Yin-chit, human rights news award winning producer, who was producing programs with political subjects at the time for RTHK, such as the June 4th Tiananmen Massacre, the 721 Yuen Long Attack, had quit after being ordered to only report on livelihood issues.

LegCo Review, a live show which allowed guests to debate politics and had been on-air for decades, was also eradicated in May 2021, after showing a video footage of June 4th vigil, hosted by the now-dissolved Hong Kong Alliance in Support of Patriotic Democratic Movements of China (HK Alliance). RTHK deleted that entire episode online and took the production team off the program.

LegCo Review had been running live since 1980 as a political debate platform between politicians and civilians.

Li threatened that if anyone had been found using public money inappropriately, they might be held responsible for compensating the loss to the HKgov.

Li Pak-chuen also censored and removed programs that had been online for over 12 months. RTHK staff were forbidden to use terms such as “Taiwan President” when describing Tsai Ing-wen, “country” when mentioning Taiwan.

Dr. Benson Wong said: Patrick Li is a sell-out who is responsible for turning RTHK into state media and a government mouthpiece.

He criticized, “Li Pak-chuen is only someone who takes advantage of his power to terrorize others, and reach selfish goals for the regime. By becoming the director of broadcasting, Li had completely politicized RTHK, and turned it into a brainwashing camp. By censoring RTHK, Li turned the Hong Kong radio and television platform into a political mouthpiece.  Not only has Partick Li sold out RTHK but he also betrayed Hong Kong.”

Dr. Wong said Li, as a government official paid by Hong Kong citizens,  should be serving Hongkongers, instead of the Hong Kong chief executive or Hong Kong Liaison Office. “He is wasting taxpayers’ money even though RTHK no longer has any value to Hongkongers.” Wong also believed that Li will be another name on the hit list of foreign sanctions.

When asked whether Li Pak-chuen would clamp the national security even more tightly on Hongkongers, Wong said people should not overestimate Li’s power: Li is nothing but a loyal puppet. Benson Wong continued, “Transferring from job to job doesn’t confirm his competence, it only proves Li’s ability to execute dirty orders from the government.”

Wong said in order to become CCP’s loyal puppet, whoever it is, has to be an idiot. “The dumber you are, the closer you can get to the top.”

Patrick Li Pak-chuen joined the civil service in August 1990. During his time as a civil servant, he had been involved in different policy-making departments, including the Education Bureau, the Security Bureau, the Chief Executive Office of Hong Kong.

“The Hong Kong government might be better off outsourcing employees, as the new basic standard will be politics first,” Wong said.