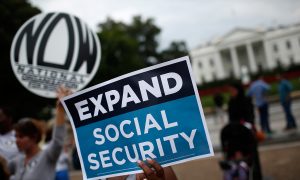 Public Banking in California Could Pose Risks to Taxpayers

Will public banking become a reality in California? State legislators are in the final stages of deciding the fate of a bill that some say could pose risks to taxpayers.

Assembly Bill 857 would enable local governments to establish their own public banks, an idea widely supported by socialist activists. The law would also exempt these banks from many taxes and licenses.

While commercial banks may not provide the most cost-effective services, having the government take over banking “may not follow the profit motive, may not be efficient, and may loan money for political rather than financial reasons, putting taxpayers in line for risk,” Joffe told The Epoch Times.

Advocates from San Francisco, Los Angeles, East Bay, North Bay, South Bay and Orange County came together in Sacramento on Aug. 26, to lobby for the passage of the bill. It has now passed a vote on both the Assembly and Senate floors, but has undergone further amendments that must be approved. Gov. Gavin Newsom has also indicated that he supports the idea.

AB 857 creates a mechanism in which local entities can form government-run banks after going through a lengthy approval process. Public banks, which are defined as financial institutions owned by one or more public entities, can invest, lend, and provide banking services to the local community and can partner with local financial institutions.

Supporters say that public banks benefit the public by focusing on pressing local needs, rather than prioritizing shareholder returns. They point to the state-owned and run Bank of North Dakota, the only institution of its type in the nation, which has survived for 100 years.

However, Joffe pointed out major losses incurred by three of seven state-run banks in Germany in the last 20 years, one of which resulted in $23 billion in losses for taxpayers.

Ben Hauck, a Long Beach resident and organizer at the California Public Banking Alliance (CPBA), argued in an interview with the Press-Telegram that corporate banks provide no more security than public banks, giving the example of taxpayer losses triggered by the Great Recession.

According to its website, CPBA — a coalition of public banking advocacy groups pushing for regional and municipally owned public banks across California — believes that public banking would serve as “a powerful tool to keep taxpayer dollars in local communities.”

One of the bill’s proponents, Assemblyman David Chiu (D-San Francisco), told the Press-Telegram, “Typical Wall Street banks that hold our public funds invest them in industries that are often antithetical to California values, like fossil fuels or private prisons.”

However, Joel Fox, editor of Fox and Hounds Daily, recently pointed out, “With banks in the hands of the public sector, the money will likely support liberal oriented initiatives” in California.

While Joffe believes that there will eventually be public banks in the state, he thinks there is some skepticism from the public, as witnessed by the rejection of the concept by Los Angeles voters in 2018.

“With 480 cities in California and a lot of energy on the progressive left, some communities will go in the direction of public banks,” he said, citing San Francisco, Richmond, Santa Monica and Long Beach as cities that might be inclined to try it.

Joffe added that “good controls could prevent embezzlement and other issues.” He hopes that such mechanisms are in place to protect taxpayers and that local governments address the risks.