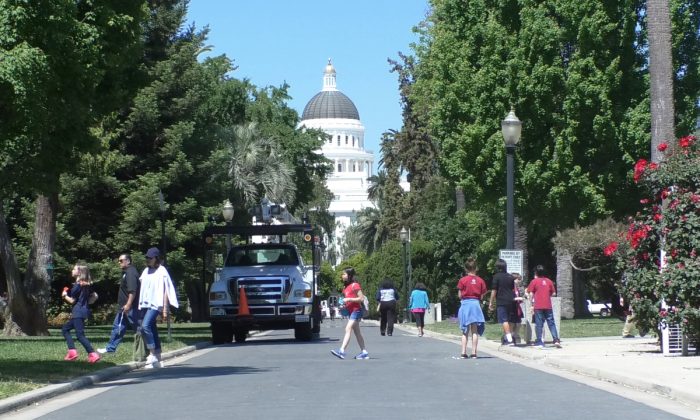 SACRAMENTO, Calif.—A group of parents and other protesters staged a rally on May 8 in opposition to changes coming to California’s public school sexual-education curriculum, part of which was described as “horrific.”

The state Department of Education approved the new guidelines for sexual education, including encouraging teachers to speak to kindergartners about gender identity and discussing explicit sexual acts with middle and high schoolers.

However, the board decided to remove five books and resources from the guidelines, one of which introduced the idea of sex to children as young as 5 years old.

Dr. Michael Kuiper, a clinical psychologist with 25 years of experience, spoke against the new curriculum, saying that many kids are too young to have the ability to fully grasp what is being presented.

“It’s a horrific kind of thing, very confusing, they are not ready to understand any of this,” Kuiper said.

There are two main issues in the curriculum, according to Kuiper. One is how health and reproductive reasons are used to justify the explicit education.

“It’s all under the guise of protecting from STDs, pregnancy, that sort of thing,” Kuiper said. “The problem is that there have been comprehensive studies over the last some decades that show that this kind of program doesn’t really actually reduce STDS or pregnancy, and in some cases, makes it worse.”

“That’s one aspect, sexualizing children under the guise of protecting them,” he added.

The other issue is gender fluidity, which is taught under the guise of welcoming children’s differences and to avoid bullying, according to Kuiper. “We don’t want anyone to be bullied, [but] the data that kids are really bullied really isn’t there.”

Kuiper also talked about the gender dysphoria—being unhappy with one’s gender—which he says is indirectly encouraged by the curriculum.

“The idea of a mother raises kids and a father goes off to work, they’re very against that,” Kuiper said. “They certainly will put up things like the ‘genderbread man,’ you can identify as a boy or a girl or as something.”

What’s called the “genderbread person” is an educational tool that defines gender as being based on identity, expression, and biological sex.

Kuiper said that many kids grow up confused, have self-doubt, and are unclear about who they are. Further, adolescent cognitive abilities aren’t fully developed to “think things through” and “make wise decisions,” he said.

He recommended that both parents and grandparents need to be involved in speaking out about these education laws.

An Educator’s Voice, A Mother’s Concern

While América Figueroa hasn’t been teaching for two years, the early childhood educator and mother of five wanted to come to the rally to help educate parents on what the new educational framework involves.

“I’m here today because of the framework. It’s a malicious document; it’s horrific,” Figueroa said. “I remember when I was in school, they told us, ‘The framework is like your Bible to teach.'”

Figueroa said that parents not knowing about the changes to their children’s education is a concern.

What adds to the difficulty is that information about the sex-ed curriculum hasn’t been provided in any languages other than English, according to Figueroa, making it difficult for many parents to understand. In addition, she said that as a Hispanic woman, the curriculum runs counter to her cultures and traditions.

Figueroa said she hopes that parents will learn about the changes and take action to protect their children.

Parents across the state have held multiple protests in recent weeks in opposition to California’s sex-ed laws, described as “comprehensive sexual health education and HIV prevention education,” according to the California Department of Education.