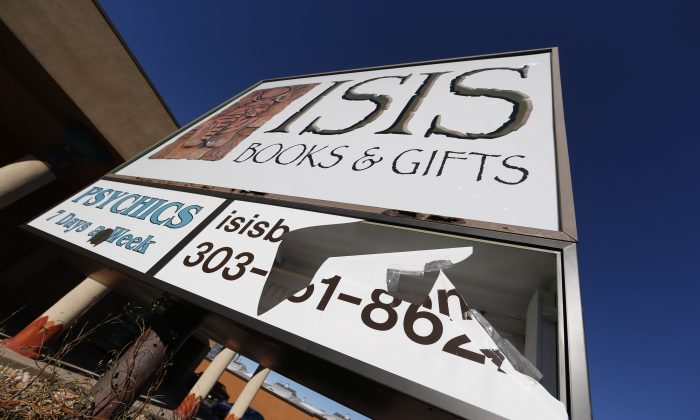 A panel of the sign outside Isis Books and Gifts store is broken Wednesday, Nov. 18, 2015, in Englewood, Colo. Harrison and his wife, Karen, say that the New Age bookstore has been targeted by vandals because of the shop's name. The owner says the store is named after the Egyptian goddess Isis, and says the most recent vandalism is likely in response to Friday's terror attacks in Paris. (AP Photo/David Zalubowski)
US

A book store in Colorado has been vandalized several times in the past year because of its name: Isis.

Denver-based Isis Books & Gifts, which also offers psychic readings seven days per week, said that it has been vandalized five times in the past year due to its name.

The owners say the store’s name comes from Isis, the Egyptian goddess of healing and motherhood. It has nothing to do with the Islamic State, abbreviated as ISIS, ISIL, or Daesh, they said.

Co-owner Jeff Harrison said the store has been around since 1980 under the Isis name. Harrison said he’s owned it since 1997, also with the same name.

“Isis is the name of an Egyptian goddess, 3,500 years old at least, the goddess of women and healing and childbirth — basically the antithesis of everything the terrorists are about,” he said, reported AP.

Harrison said he thinks the vandals are “some ignorant people believing that somehow the terrorists have a store, a gift store, in the middle of Denver, Colorado.”

“We’re all very heartbroken (about the Paris attacks) so I don’t know if somebody walking down the street just saw our name on the sign and kind of lost it for a moment and threw a rock through it,” Karen Charboneau-Harrison, the other store owner, told CNN affiliate KDVR. “Or if it was an ignorant person who actually thought this was a bookstore for terrorists, I don’t know.”

Harrison has not filed a police report. He said he’s heard from other businesses with the “Isis” name, asking if they have planned to change their name. “For now, we are definitely sticking with the name,” he said.

Amid the vandalizing, Harrison remains upbeat.

“Business has been fine. Actually on the uptick,” Harrison said.