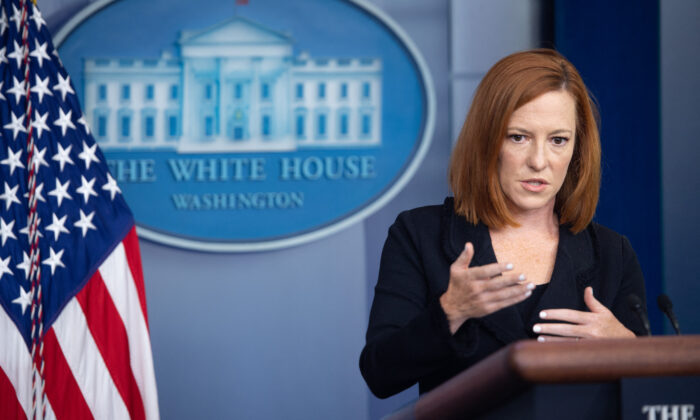 Psaki, responding to a question from a reporter on whether border patrol officials ask to see proof of vaccination against COVID-19 or negative test results “if somebody walks into the country, right across the river,” said illegal immigration is not comparable to foreign nationals who arrive by airplane to the United States.

The question was prompted by the White House announcement on Monday that all foreign visitors need to be vaccinated and present proof of their vaccination before boarding a U.S.-bound flight. White House COVID-19 coordinator Jeff Zients said at a press conference that individuals also must show a negative COVID-19 test at least 72 hours before flying.

“As individuals come across the border, they are both assessed for whether they have any symptoms. If they have symptoms, the intention is for them to have to be quarantined,” Psaki said, referring to individuals illegally entering from the southern border. “That is our process.”

Psaki said that both situations are not comparable.

“They’re not intending to stay here for a lengthy period of time. I don’t think it’s the same thing,” she added.

President Joe Biden has presided over what is on track to be the worst border crisis in U.S. history in terms of the number of illegal immigrants that U.S. agents and officers have encountered. The number topped 200,000 in both July and August.

Counties along the southern border have found COVID-19 positivity rates of up to 40 percent in illegal immigrants, sparking concerns over their being sent by federal authorities to communities across the United States when potentially COVID-19 positive.

The city of Laredo, Texas, sued the federal government recently to block the transport and release of illegal immigrants into the city after local NGOs became overwhelmed with the volume of untested illegal immigrants. The city subsequently withdrew the lawsuit after reaching an agreement with federal authorities.

Texas Gov. Greg Abbott engaged in a back-and-forth with Attorney General Merrick Garland after issuing an executive order that restricted the transportation of illegal aliens into Texas due to COVID-19. Abbott’s order was blocked by a federal judge.

“We are expelling individuals based on Title 42 specifically because of COVID because we want to prevent a scenario where large numbers of people are gathering posing a threat to the community and also to the migrants themselves,” Psaki added.

ACUNA, Mexico: Haitians I’ve spoken to so far think everyone is going to be deported.

Some are bringing their belongings back to the Mexican side to decide what to do.

All have lived in Chile or Brazil for at least 2 years. All say going back to Haiti “is not an option.” pic.twitter.com/f7HJG0eF9l

The White House press secretary’s comments come as over 10,000 illegal immigrants have amassed in Del Rio, Texas, about 60 miles northwest of Piedras Negras and Eagle Pass, in recent days—the majority from Haiti.

U.S. border authorities have so far removed over 6,500 from the area.