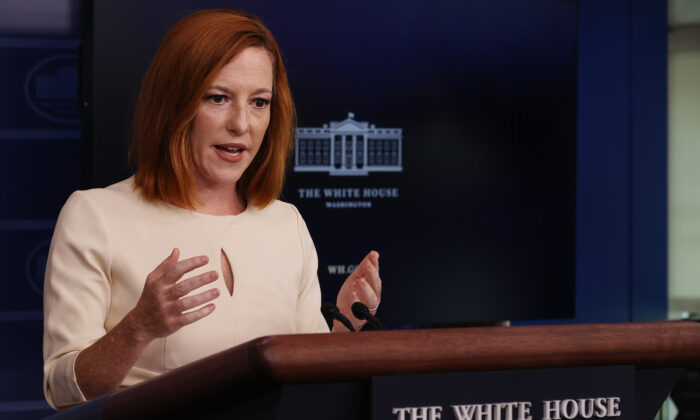 Psaki acknowledged Tuesday an enforceable rule from the Department of Labor’s Occupational Safety and Health Administration (OSHA) is not here yet, promising that it will be coming. Psaki said she couldn’t offer an “expectation of when that’ll be finalized.”

“I would say that requiring and mandating for businesses of 100 people or over vaccines is not a small task. That is a big bold proposal idea and something that we want to implement with as much clarity as we can,” she said in response to a question about vaccine mandates. “We know there will be questions, even after these rules are put out, we understand that. But that’s why we wanted to take a little bit of time, not too much time, to get it done.”

On Sept. 9, President Joe Biden announced sweeping mandates for private businesses with 100 or more employees, requiring workers at such companies to either submit to regular weekly COVID-19 testing or get the vaccine. Also announced were mandates for federal contractors, federal employees, and healthcare staff working at Medicare- or Medicaid-funded facilities.

But since the announcement, there has been speculation as to why it’s taking OSHA so long to come up with a rule. So far, the White House has only sent out a news release regarding the mandate on private businesses.

“There is nothing there yet that gives employers any mandate,” Stephanie McFarland, a spokeswoman for the Indiana Occupational Safety and Health Administration, told the Federalist website last week. “The president made an announcement on this asking OSHA to do it, but we’ve not yet seen anything come from it yet,” she continued.

About two weeks ago, Psaki also addressed questions about the OSHA rule during a press briefing.

“We never gave an exact timeline, so—maybe we should have been more specific at the time,” Psaki said on Sept. 30. “Obviously, it takes some time. And we want to make sure when we put these out, they’re clear and they provide guidance necessary to businesses.” Then, Psaki also told reporters she cannot provide an exact timeline on the rule, adding that the administration will have more information “in the coming weeks.”

In the news conference, Psaki also addressed an order signed by Republican Texas Gov. Greg Abbott on Monday banning any entity from implementing vaccination mandates for employees or customers in the state. Earlier this year, Florida Gov. Ron DeSantis also took action to bar the state from using vaccine passports.

“Our intention is to implement … these requirements across the country,” Psaki said, “including in the states where there are attempts to oppose them.”