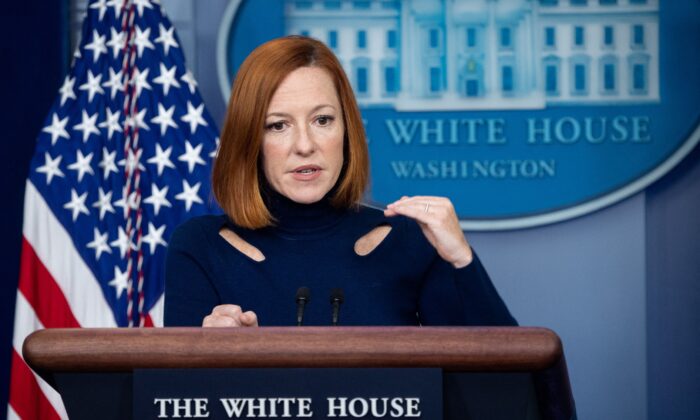 “I would say that we respect the jury’s decision. Lying to the police, particularly about something as heinous as a hate crime, is shameful. Instances of that need to be investigated fully and those found guilty need to be punished, and false accusations divert valuable police resources away from important investigations; they make it harder for real victims to come forward,” Psaki told reporters in Washington.

Smollett, 39, alleged in 2019 that he was accosted by two white males who sported gear indicating they were supporters of then-President Donald Trump.

But his story fell apart under scrutiny and it emerged he planned the fake assault with two Nigerian-born brothers.

Smollett was convicted on Thursday of staging the hate crime and lying to police.

When Smollett first went public with his allegations, then-former Vice President Joe Biden and then-Sen. Kamala Harris (D-Calif.) were among the slew of left and left-leaning figures to react.

Biden said within hours that “what happened to Jussie Smollett must never be tolerated in this country.”

“We must stand up and demand that we no longer give this hate safe harbor; that homophobia and racism have no place on our streets or in our hearts. We are with you, Jussie,” Biden wrote on social media.

Harris, now the vice president, called Smollett “one of the kindest, most gentle human beings I know” and said she was praying for his quick recovery.

“This was an attempted modern day lynching. No one should have to fear for their life because of their sexuality or color of their skin. We must confront this hate,” she also said at the time.

Neither Biden nor Harris has commented on the developments in the case, including the conviction.

Psaki was asked by a reporter who quoted the posts whether there were any “lessons learned” since the conviction.

“I think there are lessons learned, perhaps, for everybody that commented at the time,” Psaki said.

She noted that Trump, shortly after Smollett made his claims, said, “I can tell you that it’s horrible” and “It doesn’t get worse,” before outlining the administration’s respect for the jury’s decision.

However, about three weeks later, after Chicago police officials disclosed to the public that Smollett appeared to fake the attack, Trump took to Twitter to describe Smollett’s remarks as “racist and dangerous.”

Smollett had earlier criticized Trump, but in an interview after the faked attack and before the police briefing, said, “I appreciate him not brushing over it.”