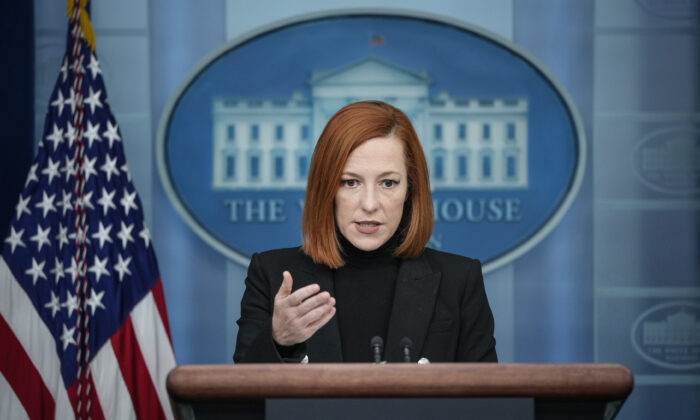 Earlier, the European Union and the United Kingdom announced that they, too, would sanction Putin, Lavrov, and several top officials. Other world leaders who have been personally sanctioned by the U.S. include Belarussian President Alexander Lukashenko and Syrian President Bashar al-Assad.

As sanctioning a world leader is a rare step, Putin will likely see it as a provocation. However, as some media analysts noted, Putin does not hold significant wealth abroad.

“The president’s strong view and strong principle from the beginning of this conflict … has been to take action in steps in alignment with our European partners and this is evidence of that,” Psaki said Friday when asked about why the administration is now choosing to sanction Russia’s top leaders.

A Russian Foreign Ministry spokeswoman, Maria Zakharova, told Russian state media outlets that relations between the West and Russia have “approached the line” that marks the point of no return.

Previously, the United States announced sanctions against some of Russia’s largest banks, Russian sovereign debt, and elite members of Russian society. Analysts have noted that it’s not clear how much can be accomplished by the sanctions.

On Thursday, President Joe Biden said Putin’s invasion of Ukraine has triggered a “complete rupture” in U.S.-Russia relations. “Putin will be a pariah on the international stage,” Biden remarked, adding that assault marked a “dangerous” moment for Europe and the rest of the world.

But in January, Russia warned that it would cut ties entirely with the United States if Putin was sanctioned. It came as Russia started to amass more and more troops along its borders with Ukraine.

On Friday, Putin released an address urging Ukraine’s military to overthrow their political leaders and negotiate peace, while Kyiv officials told citizens to defend the capital.

The city’s residents were told by the defense ministry to make Molotov cocktail bombs to repel the invaders, and on Friday evening witnesses reported hearing artillery rounds and intense gunfire from the western part of the city.

President Volodymyr Zelensky filmed himself with aides on the streets of the capital, vowing to defend Ukraine’s independence. Some families cowered in shelters after Kyiv was pounded for a second night by Russian missiles. Others tried desperately to get on packed trains headed west, some of the hundreds of thousands who have left their homes to find safety, according to the United Nations’ aid chief.

The Russian incursion started early Thursday, local time, after Putin announced that he would recognize the Donetsk and Lugansk separatist regions as independent at their leaders’ request, alleging that the invasion is the only option left.