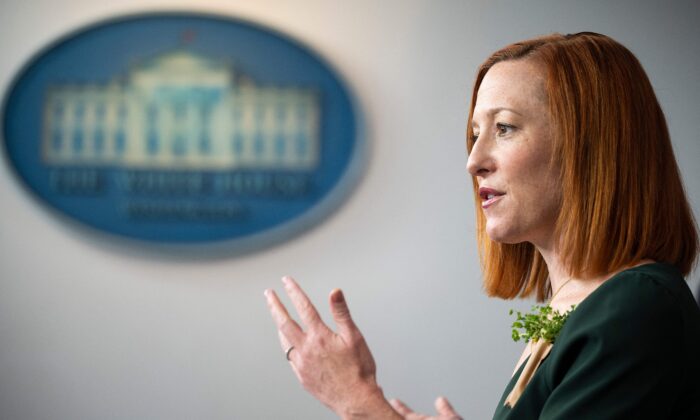 White House Press Secretary Jen Psaki on Thursday used the phrase “crisis on the border” to describe the spike in illegal crossings at the U.S.-Mexico border, before walking back on her comments moments later.

The Biden administration has avoided using the term “crisis” to describe the situation at the southern border.

“There have been exceptions set outside of—unrelated—to any vaccine doses or request for them that they they would be partners in dealing with the crisis on the border,” Psaki told reporters, responding to a question on the topic of lending AstraZeneca COVID-19 vaccine doses to Mexico and Canada.

“And there have been many requests unrelated that they, for doses of these vaccines … every relationship has multiple layers,” Psaki said, noting that there “is rarely just one issue” when working with other nations. “Certainly that’s not the case with Mexico or any country around the world.”

Psaki later appeared to walk back her comment when questioned by a reporter whether her use of the term “crisis” signaled a shift in the Biden administration’s view of the situation. She reverted back to the administration’s line that there are “challenges” at the border, and that the White House’s stance on the issue has not changed.

President Joe Biden has declined suggestions that the situation at the border is reaching crisis point and is yet to announce any concrete plans to address the growing number of illegal crossings. When asked by a reporter earlier this month whether there’s a crisis at the border, Biden replied, “No, we’ll be able to handle it.”

The Biden administration on Monday, however, acknowledged that the recent spike in illegal immigrants crossing the border is “a big problem.” White House press secretary Jen Psaki said during a daily press briefing that the administration is assessing whether to add additional facilities for unaccompanied minors.

The influx of illegal immigrants, including many minors, at the border has reached new highs since the last crisis in 2019. The number of illegal crossings is skyrocketing as Biden begins implementing his plan, which he campaigned on, to roll back Trump-era immigration rules and policies aimed at curbing the flow of illegal immigration.

The U.S. Customs and Border Protection (CBP) this week announced a more than 100 percent month-over-month increase in February in two categories of illegal aliens—family units and unaccompanied minors.

Janita Kan and Tom Ozimek contributed to this report.