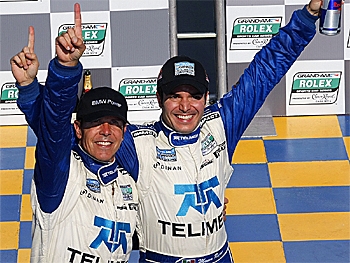 James Fish
alias for Chris J
View profile
Follow
biggersmaller
Print
What better way to win a second Grand Am Rolex Daytona Prototype championship in a row, than with a record-setting eighth win in a season?

That is what Telmex-Ganassi drivers Scott Pruett and Memo Rojas did at the Montreal 200 Saturday afternoon. The pair put their Riley-BMW into the lead with excellent pitwork, and outpaced the competition once they had clear track ahead.

“The car was fabulous. I mean absolutely fantastic,” Scott Pruett told SPEED-TV after the race. “We took a little extra time on that first stop to put a little more fuel in so our second stop would be shorter, it paid off.

Pruett was elated by the result; obviously winning hasn’t gotten old for Pruett yet.

“It’s just exciting; it’s just so cool. I said this was a big race for us to win, and we did. Awesome, man, awesome.”

"Here I am—I turned fifty this year; it’s been crazy,” Pruett continued. “We had another record season. It’s so great working for Chip Ganassi and the whole organization—it’s all about the winning, and, I tell you, it couldn’t be any sweeter.”

Memo Rojas attributed the season’s success to a good team putting in hard work. “We are overwhelmed with our results,” Rojas told SPEED. “We just never stop pushing. Even today, when we had good chances of having the points in our favor, we still went for the lead, we got it and we won the race.” Alex Gurney and Jon Fogarty started from the pole in their Gainsco Riley-Chevrolet, with Memo Rojas right behind. After a first-lap yellow reshuffled the field, Rojas ended up sixth, then worked his way up to fourth by lap 25, when the third caution of the race gave teams a chance for free fuel, tires, and a driver change.

This is when Ganassi strategy paid off. The team had given up track position under the early yellows in order to add more fuel. Now the crew could short-fill the Riley-BMW and send it out ahead of the competition.

Once Pruett was in the car and in the lead, no one else had a chance. Another full-course caution on lap 47 tightened up the field, but Pruett made a great restart and gapped second-place Alex Gurney immediately. The Telmex-Ganassi car was 1.7 seconds ahead at the checkered flag.

Pirelli came through with some new rear tires for the Corvettes and Camaros for Montreal, and that made all the difference: for the first time in a long time, it was not a Mazda atop the podium.

Paul Edwards and Scott Russell fought their way to their first GT win in their new GT Corvette, battling past the Stevenson Motorsports Camaros of Ronnie Bremmer and Robin Liddell on lap 57.

“[Team owners] Leighton Reece and Katie,  the whole crew have been working like crazy for us to get a result this year,” Edwards told SPEED-TV. “It seemed like an impossible task, but the Corvette has been an awesome car. We deserved a lot of wins but today we put it all together.”

Boris Said in the #31 Marsh Racing Corvette started from the pole, but the #70 SpeedSource Mazda of Jonathan Bomarito and Sylvain Tremblay, the #40 Dempsey Mazda of Joe Foster and Charles Esplenaub , and the #57 Stevenson Camaro of Andrew Davis all wanted the lead; Davis ended up grabbing it and holding it for a while.

The third full-course caution, with about an hour left in the race, drastically changed the GT race, as several cars stayed out and took wave-bys, dropping the rest of the field 7/8ths of a lap behind.

When the green flag waved on lap 30, Ronnie Bremmer (filling in for Jan Magnusson, who was in Ontario for the American Le Mans Series Grand Prix of Mosport) was in the lead, with the SpeedSource Mazdas of Sylvain Tremblay and John Edwards, behind, followed by Robin Liddell. Paul Edwards was sixth in class, almost a lap behind.

By lap 32, Liddell had passed the Mazdas and was chasing his teammate, while Jeff Segal in the #69 SpeedSource Mazda had passed his teammates to take third in class.

Over the next thirty laps, Edwards chased the leaders, finally taking third on lap 54. Two laps later Robbin Liddell passed Ronnie Bremmer, but Liddell had some front bodywork damage from banging curbs (and maybe other cars.) As Liddell pushed past his teammate, pieces of splitter, fender and floor were flying off his car.

Without his splitter, Liddell was seriously lacking front downforce; no amount of spirited driving could make up for the body damage. On the next lap Bremmer tried to set up Liddell going into the chicane. Liddell couldn’t stop and had to run down the escape road, while Paul Edwards, lurking right behind, seized the chance to seize the lead.

One out front, Edwards opened a gap over the next two laps and cruised home for the team’s first win of the season.

“It was going to be tough to get around the Camaros,” Edwards explained. “It was pretty much even between the Corvettes and Camaros, but luck was on our side today. Liddell [went off] and I just happened to get in the right place at the right time and we pulled of f the win.”

Which SpeedSource Mazda Will Win GT?

The Daytona Prototype championship has been decided, but the Grand Touring chase is still on. It will be decided at the season finale at Miller Motorsports Park in Utah, on September 11.

Jonathan Bomarito, Tremblay’s co-driver, has 291 points (he missed some races,) and Dempsey Racing’s James Gue (also driving a Mazda) has 289, but Gue can’t expect to win unless the other two Mazdas take each other out early in the race.

The Grand Am Rolex Utah 250 at Miller Motorsports Park in Toole, Utah, will start at 2 pm. EDT on September 11, 2010. Tickets for the race weekend, which also features a NASCAR West race on Sunday, are available through SmithsTix.

The race will be broadcast live on SPEED TV.