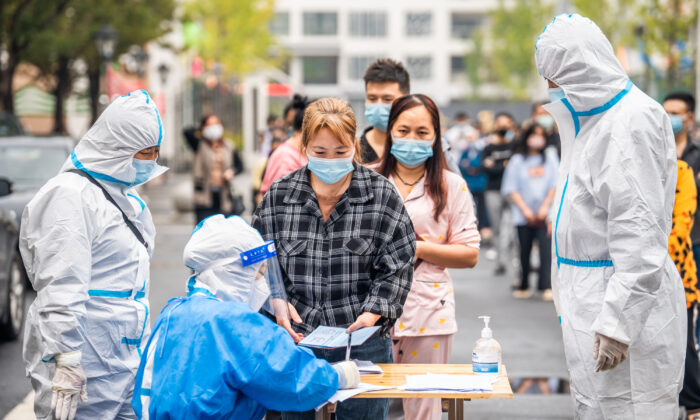 Citizens line up to register for antigen testing at a prevention and control point in Bijie, Guizhou Province, China, on Sept. 12, 2022. (CFOTO/Future Publishing via Getty Images)
CCP Virus

Over 2,000 secondary school students and 300 teaching staff of a private high school in China’s southwestern Guizhou Province are locked down amid the communist regime’s zero-COVID policy.

Guiyang Happy Valley International Experimental School was found to have “abnormal PCR test results” on Sept. 6, as reported by Netease, a popular digital news portal in China. The report didn’t mention how many abnormal results had been detected or what was meant by “abnormal.”

Located in the Wudang District of the provincial capital Guiyang City, the boarding school reportedly has 2,624 students and 300 teachers and staff members, with students’ ages varying from 12 to 18.

The local authorities immediately took over the school, imposing a complete lockdown of the campus. Students were either confined to their dormitories or transferred to quarantine hotels and makeshift hospitals. Neither the teachers nor parents were informed of the whereabouts or status of the students, according to some parents.

Concerned and anxious parents posted online messages asking for help as they searched for their children. They blasted the local authorities for covering up the true situation of the outbreak and are worried about the physical and mental well-being of their children.

“The government told us nothing. Even the teachers had no idea where their students were; we told them [the teachers] after we found our children by calling the local hotels,” Ms. Hao (pseudonym), parent of a student at the school, told The Epoch Times.

“At first, on Sept. 2, the school administration informed us that there was an outbreak of the pandemic in the city and that the boarders couldn’t go home,” Hao said.

She said that her child was not allowed to leave the dormitory on Sept. 2, which was shared by six students. Then, on the early morning of Sept. 7, the students were suddenly notified they had to have a PCR test. “But they were actually taken to a quarantine hotel. They brought no daily necessities at all because they were thinking they would return to the dorm after the test,” Hao said.

“I made 20 calls within four minutes, trying to find my child,” said the desperate mother, “I almost collapsed at the time.”

Though worried about her child who is still in the quarantine hotel, Hao said that her child is among the lucky ones, as the hotel can provide food and drink to the students staying there.

Ms. Liang (pseudonym), whose niece is also a student of the school, told the publication on Sept. 12: “My niece was taken to a hotel for isolation at noon today, but she hasn’t called us yet, and we haven’t been able to find out which hotel she is in.”

Mr. Wu (pseudonym), a parent of another student, told the publication that parents could do nothing at all.

“A parent called Guizhou municipal pandemic prevention and control center, and a staffer only replied: ‘The situation is very serious.’ But they didn’t tell us how serious it is and how many students and teachers have been infected [by the COVID-19 virus]. We can do nothing. We live in panic and anxiety every day,” said Wu in the interview.

According to a post on Weibo, China’s Facebook-like social media platform, students were cut off from communicating with the outside on Sept. 6.

“We are students of Happy Valley International Experimental School, and this is the fifth day we have been locked in our dorms,” the post said, adding that the students were banned from leaving their dorms at around 6.40 a.m. on Sept. 6 and that communication was cut off at about 7 a.m. or 8 a.m., “not allowing us to tell anyone any information.”

The Epoch Times was not able to verify the authenticity of the post.

“The children who are still isolated in the school must be in extreme panic,” said Hao.

She said that a student who developed a fever was taken directly to a makeshift hospital. “Children have psychological trauma to a different extent, as they have no idea how they will be treated and where they will be taken,” added Hao.

She said in the process of locating her child, she came to know that students with more serious symptoms were taken to makeshift hospitals, which are in reportedly poor condition.

“They are just large unpartitioned spaces, with one doctor overseeing the whole place. Students become volunteers there,” Hao said. She was worried that they were exposed to high risk of exposure to the COVID-19 virus in that environment.

Students sent to makeshift hospitals didn’t get any medical treatment. They were told to drink more water, according to Hao.

The school had a total of 16 asymptomatic cases of COVID-19 as of Sept. 11, according to the regime’s major mouthpiece Xinhua News Agency.

Hao was doubtful of the official data.

“The inside information I saw was that 147 people were confirmed infected,” Hao told The Epoch Times.

A screenshot of an online post viewed by the publication reveals detailed information about the 147 confirmed cases as of 4.00 a.m. on Sept. 11, including the number of positive cases of students in various classes and grades and the  teachers.

The Epoch Times is not able to verify the authenticity of those numbers.

The official data is difficult to verify, as the communist regime routinely alters or suppresses information.

The Epoch Times reached out to the Wudang District Education Department on Sept. 12, and the staffer answering the call replied to our request for comment, “We can’t say; we all follow the arrangements of the higher authorities.”

A staff member of Ramada Encore Guiyang confirmed to The Epoch Times that some students were transferred to the hotel from Happy Valley International Experimental School several days ago, but she said that she couldn’t give the exact number of students.