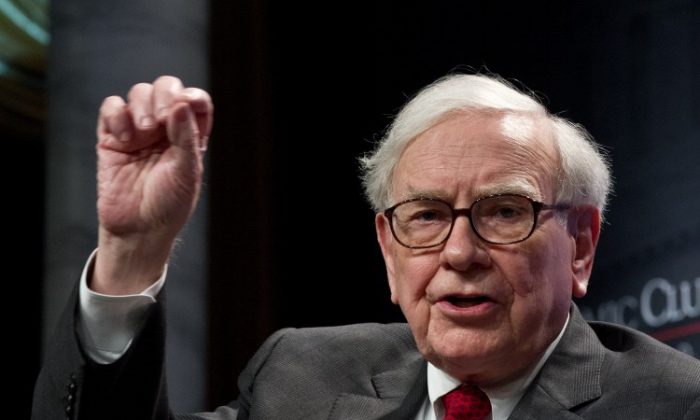 Billionaire Warren Buffett, CEO and chairman of investment company Berkshire Hathaway, speaks at the Economic Club of Washington DC, in this file photo. Berkshire Hathaway provides a once a year investment letter that is closely watched by media, market experts, and investment gurus. (By Nicholas Kamm/AFP/GettyImages)
Business

Many investors receive daily emails from investment research firms, financial research companies, investment funds, or any type of company that earns its revenue by investing the pooled capital of investors into stocks and bonds, that is, they manage, sell, and market funds for investors.

Enticements dangled before investors can include a company that pays a 45 percent dividend yield, a newsletter with investor insights for a $600 annual subscription (after which the cost rises to $1,500), advice on how to turn $30,000 into $2.1 million in 35 months, or firms that can provide investment information for a fraction of the cost that other investment firms charge.

A very recent offer for investment information proposes a 2-year Ambassador Level membership for a little over $1,000, instead of the standard cost of a little less than $6,000, and a couple of books. The Executive Level 1-year membership comes close to the standard cost.

Well, although the article does say to watch the market as to what is happening in the local, national, or global political and market environment, it does not offer specific advice.

The following qualification at the end of the article warns the investor to be cautious: “Nothing in this article constitutes investment advice and any recommendations that may be contained herein have not been based upon a consideration of the investment objectives, financial situation or particular needs of any specific recipient.”

Warren Buffett, chairman and CEO of Berkshire Hathaway, does not send daily newsletters and investment ideas to prospective clients or stockholders. The company provides a letter once a year to shareholders.

On the other hand, the media, market experts, and investment gurus watch Buffett like a hawk, immediately telling the world once he makes a move or if there is anything they think they have learned about his investment strategies.

An August 2012 draft report from Yale University concludes: “Buffett’s performance is outstanding as the best among all stocks and mutual funds that have existed for at least 30 years. … In essence, we find that the secret to Buffett’s success is his preference for cheap, safe, high-quality stocks combined with his consistent use of leverage to magnify returns.”

The 2012 stockholder letter, published on Berkshire’s website, was rather contrite, stating in the first few paragraphs that Berkshire had a subpar year, despite a gain of $24.1 billion. “But subpar it was. For the ninth time in 48 years, Berkshire’s percentage increase in book value was less than the S&P’s percentage gain.”

In the next paragraph, Buffett warns that his winning streak might come to an end. “If the market continues to advance in 2013, our streak of five-year wins will end.”

On Sept. 26, 2011, Berkshire announced in a press release that it would repurchase its shares at a price limit of 10 percent of book value.

The company was transparent concerning the reason for the repurchase. “In the opinion of our Board and management, the underlying businesses of Berkshire are worth considerably more than this amount, though any such estimate is necessarily imprecise.”

On Dec. 12, 2012, the company announced that it had raised its price limit and repurchased Class A shares at 120 percent of book value and was open to the repurchase of more of its stock.

“Breaking with past practice, and changing the financial rules he himself laid down, Berkshire is buying back its own stock—and plans to keep buying back its stock at any price up to and including 1.2 times ‘book value,’” a December 2012 article on the Daily Finance website states.

Berkshire uses book value, which is the value of the company and based on the cost when the asset was bought minus the depreciation taken over the years for tax purposes, lowering the cost value even further. The difference could be quite large when compared to the present market value of the company.

“A more disturbing theory to explain Buffett’s decision to spend more on Berkshire stock is this: Doing so is simply choosing the lesser of evils,” according to the Daily Finance article.

“With banks paying 0.1 percent interest, he can’t afford just to sit on it, though. He’s got to invest it in something,” the Daily Finance article states.

As with so many other companies, Buffett could have chosen the merger or acquisition route, as he had the cash on hand and didn’t have to borrow in the market. But, instead he analyzed the stock market and saw prices that were more often than not overvalued and not as undervalued as his company’s stock.

“Buffett upped his spending limit and agreed to buy himself for 1.2 times book, rather than paying nearly twice that for a bunch of lesser businesses,” according to the Daily Finance article.

No Stranger to Contradictions

Buffett’s 2012 letter to Berkshire’s shareholders “got a lot of press attention, but, as is often the case with Buffett, even in the newspapers that he does not own, the attention was so worshipfully deferential that it ignored a glaring contradiction in the letter,” a March 4 article on the reason.com website states.

The inconsistency stems from Buffett who states, “There was a lot of hand-wringing last year among CEOs who cried ‘uncertainty’ when faced with capital-allocation decisions.

The article interprets Buffett’s remark as ridiculing corporate executives because they were worried about new tax rules and government regulations under discussion and thus might not commit their funds to projects.

Then, in a different section of his letter, Buffett states that his company would commit to invest in certain projects only if the tax policies and regulations allow him to earn a decent return.

Even though Buffett criticizes executives who worry about changes to tax laws and regulations, he and his company aren’t impervious to what is being legislated by the federal government.