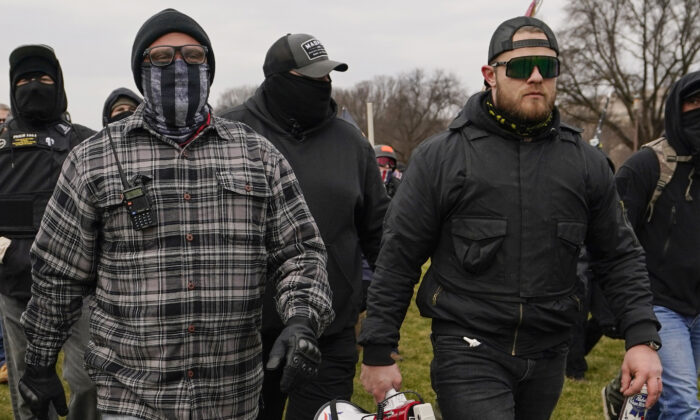 Three members of the Proud Boys pleaded not guilty to a slew of Jan. 6-related charges on March 22 in U.S. District Court.

Charles J. Donohoe, 38, of Kernersville, N.C., pleaded not guilty to the same list of charges, which includes assaulting, resisting or impeding police; obstruction of law enforcement during civil disorder; destruction of government property; conspiracy to obstruct an official proceeding; and three other counts.

Biggs and Donohoe were already under indictment for alleged crimes at the U.S. Capitol on Jan. 6.

A second superseding indictment of six members of the Proud Boys was issued on March 7.

That indictment added former Proud Boys national chairman Enrique Tarrio, 38, of Miami, who faces the same charges as Biggs and Donohoe. Tarrio will be arraigned on March 30.

The superseding indictment also added Dominic J. Pezzola, 45, of Rochester, N.Y., who pleaded not guilty March 22 to the same seven charges, and a charge of robbery of personal property of the United States.

Two other Proud Boys, Ethan M. Nordean, 31, of Auburn, Wash., and Zachary Rehl, 36, of Philadelphia, will be arraigned on seven counts each on March 23.

Prosecutors allege the men formed a new Proud Boys chapter called the Ministry of Self Defense to prepare for the Jan. 6 Stop the Steal rally in Washington and a subsequent storming of the Capitol.

The group encouraged other Proud Boys to attend the rally and obtained “paramilitary gear and supplies” such as tactical vests, protective gear, and radios. They planned to be “incognito” by not wearing the group’s traditional colors or apparel, prosecutors said.

Tarrio was not in Washington on Jan. 6. He was ordered to leave the day before, due to his recent arrest for burning a Black Lives Matter banner taken from a DC Methodist church.

The criminal complaint describes a meeting Tarrio had in a parking garage on Jan. 5 with Oath Keepers founder Elmer Stewart Rhodes III.

The 30-minute meeting took place in an underground garage near the Phoenix Park Hotel, the complaint said.

“During this encounter, a participant referenced the Capitol,” the criminal complaint said, although it did not elaborate.

Pezzola is accused of stealing a riot shield from a Capitol Police officer and later using it to break a window.

At the top of the stairs leading from the west plaza to the Capitol, prosecutors said he shouted at police: “We ain’t stopping! We ain’t [expletive] stopping! [Expletive] you! … You think Antifa’s [expletive] bad, just you wait!”

Donohoe threw two water bottles at police, prosecutors allege. Biggs filmed a selfie-style video in which he said, “So we just stormed the [expletive] Capitol. Took the [expletive] place back.”

Later in the afternoon, a Proud Boys member asked on social media, “Are we a militia yet?” Tarrio replied, “Yep,” the criminal complaint said. Two subsequent messages said “Make no mistake” and “We did this.”

The Proud Boys’ trial was originally set to begin May 18, but with the addition of Tarrio and Pezzola to the case, attorneys said there is no way they can prepare for a trial that quickly.

Other defendants’ attorneys object to significant trial delays unless their clients are released from pretrial detention.