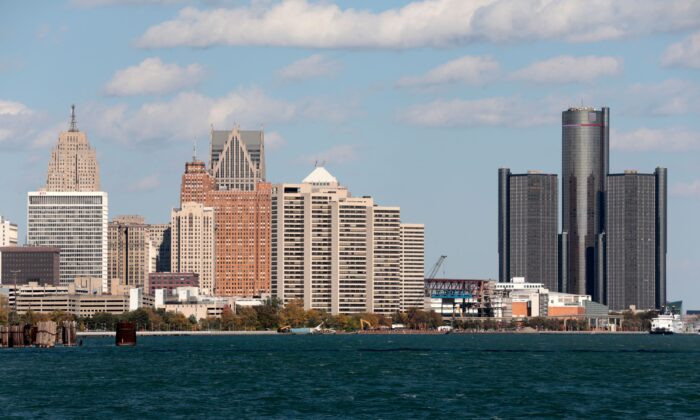 The Detroit skyline seen from Riverside Park in Detroit on Oct. 23, 2019. (JEFF KOWALSKY/AFP via Getty Images)
US Features

Extended rent moratoriums and the slow distribution of billions in federal rent assistance are driving many small landlords to call it quits.

“And we have very few new people entering into the business.”

“Multiple landlords have told me they are selling out,” Jon Frickensmith, president of the South Wisconsin Landlord Association, told The Epoch Times. “They ask us how to get out of the business and how to get the tenants out of their houses. These are mom-and-pop operators, the kind of landlords that are willing to take tenants with bad credit or a criminal history. This will only add to the housing crisis.”

The vast majority of landlords in the United States are individuals, with most owning one or two rental houses.

In Michigan, more than $500 million in federal pandemic emergency assistance funds remain unspent, with thousands of applications for aid mired in state and municipal bureaucracies.

“Everyone in the process agrees the application process is flawed. The problems created by the system are intensified for private owners,” Greg Stremers, an attorney in Port Huron, Michigan, told The Epoch Times.

“Many property owners are selling off their properties, creating an even deeper shortage of rental properties. When I process an eviction, the tenants are having difficulty finding a new place to live, which is driving rents higher.”

Stimulus Not Paying for Rentals

Stremers said the system is “undeniably deficient,” pointing out that, of the $46 billion allocated by Congress in emergency rental assistance, only $3 billion has thus far been distributed to applicants nationwide by state and local agencies.

According to the U.S. Department of Treasury, states and municipalities have until Sept. 30 to disburse the funds or they may be reallocated.

The latest Centers for Disease Control and Prevention eviction moratorium is set to expire on Oct. 3.

The National Equity Atlas estimates that landlords across the United States are owed more than $21 billion in overdue rent.

Don James, president of the Florida Landlord Association in Coral Gables, believes the moratorium is detrimental to renters as well as landlords.

“We as landlords cannot enforce our rental contracts and, this being a seller’s market, [it] is forcing landlords to sell their properties. This is going to cause shrinking of rental facilities, thus hurting renters,” he said.

Mike Bodeis, president of the 450-member Port Huron Area Landlord Association and owner of 40 rental houses, told The Epoch Times: “It’s a myth that 3.6 million Americans may soon be made homeless. Two-thirds of them could be paying their rent, but are not because they choose not to. They didn’t choose to pay their rent or utility bills with all the stimulus money they received.

To illustrate, Bodeis said: “In one eviction, in which I personally participated, we took six flatscreen TVs out of the house. It’s all about priorities.”

President of the Flint, Michigan-area Genesse Landlord Association, Ed Constable, said that the rent moratorium has had little effect on some of the members, but has been “devasting” for others.

“Maybe a quarter of residential tenants have signed the eligibility affidavit for the emergency pandemic rent assistance,” Constable said.

“Some instances can be horrible. One woman was in debt to me for a year’s back rent. Rather than go through the process, I ended up writing her a check for one month’s rent. That’s what it took to finally get her out. After that experience, I have zero interest in more residential rentals.”

The terms of the emergency rent assistance application are supposed to preserve the right of a landlord to evict a tenant for committing a criminal act on the premises, damaging property, threatening the health and safety of other tenants, or violating building codes and health ordinances, and for breach of contract other than non-payment of rent.

“Everything depends on the judge,” Constable said. “We had one landlord with a beautiful, high-end rental home. His tenants moved in, along with six dogs and a potbelly pig! The case came before a liberal judge. It was delayed forever. Ultimately, the landlord could not get a writ to evict.”

In Michigan, emergency rent assistance checks for up to 12 months of back rent, and even three months of future rent, are made out directly to the landlord for the benefit of qualifying tenants, but the tenants must apply for the aid.

While that may sound like a win-win proposition, Stremers said that only a small percentage of tenants apply.

“In fact,” Stremers said, “even the tenants typically don’t apply, and if the owner wants them to, we have to encourage them. The vast majority of the tenants rarely show up for the eviction pretrial, and rarely submit the proper CDC paperwork to start the moratorium process.”

Included in the paperwork is a requirement for the tenant to provide a government-issued identification card.

Stremers said the reason for the card is that “under a prior federal stimulus for renters to purchase homes, there was fraud by the tenants—the money went to tenants, who did not make the payments.”

Baird said that in the Lake Erie region, “tenants are not signing up for help.”

“They don’t seem to care about paying their bills. They have no reason to care. There are no consequences. The government is letting them get away with it,” she said.

One Wisconsin landlord stated in an email: “I don’t know why the government thinks landlords can afford to pay bills when not collecting rent, or why we should be responsible for the tenant’s inability to pay. I think they are taking advantage of the moratorium to not pay on time.”

Not every landlord in Wisconsin is dissatisfied with the emergency rental assistance distribution process. Describing the situation in Rock and Walworth counties, one landlord called the service provided by the nonprofit agency Community Action, which coordinates the disbursement of the funds in those areas, “amazing.”

“While the majority of our tenants have been very good about staying current, there have been some that have taken advantage of the moratorium and stopped paying. … While there are assistance programs available to help tenants pay, too few apply, and there is no assistance available specifically for the property owners,” said Andrew Hay, spokesperson for a property management company in Racine. “It would be extremely helpful if landlords were able to apply on the tenants’ behalf.”

When asked what he thought would make things better for landlords and tenants in Michigan, Bodeis said: “Quit giving away our children’s and grandchildren’s money. Get rid of supplemental unemployment benefits. People get base unemployment of $160 per week and a supplement of up to $300 per week. There are ‘help wanted’ signs everywhere.”

Stremers stated, “It is imperative tenants have opportunities to return to work to stop this cycle.”

Michigan is one of 24 states that have continued the supplemental unemployment benefit.

With tens of thousands of job openings available, Michigan’s unemployment rate hovers at about 5 percent, with 600,000 people drawing unemployment benefits. The overwhelming majority of these qualify for the federally funded supplement.