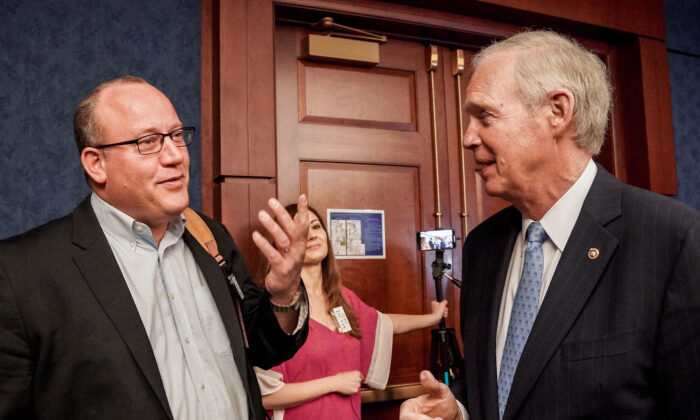 People injured by COVID-19 vaccines have been largely ignored by hospitals, federal health agencies, and the mainstream media.

According to Dr. Pierre Kory, a first-ever protocol for vaccine-injured people focuses on countering the spike protein mechanisms and shows promising results.

Kory is a pulmonary and critical care specialist. He’s also the president of the Frontline COVID-19 Critical Care Alliance (FLCCC Alliance), a non-profit organization dedicated to developing protocols to prevent and treat COVID-19.

“What we’re trying to focus on is ‘spikeopathy,’ which is the study of the pathogenesis of the spike protein. And there’s no one teaching that to doctors in the system,” Kory told EpochTV’s “American Thought Leaders.”

“I’m humbled by these patients. Often they’re extremely complex, very sick. But I get them better to some extent, sometimes [to] large extents. I see robust responses. I see the diminution or mitigation of lots of symptoms, and others are much more difficult.”

‘The Vaccine-Injured Are Being Ignored’: Dr. Pierre Kory on Treating Vaccine Injury Syndrome and the Suppression of Early COVID Treatment

On Aug. 3, the FLCCC Alliance updated its “I-RECOVER” post-vaccine protocol (pdf), which stresses the importance of early and individualized treatment.

Kory said there are about six or seven mechanisms under which the spike protein is causing illnesses. The protocol attempts to find therapeutics to counteract or control the mechanisms.

Studies and doctors have said that COVID-19 vaccines, especially those using mRNA technology, produce persisting spike protein in the human body and likely cause clots, heart inflammation, cancers, and other illnesses.

Kory said the protocol is still in development.

“Everything I’m doing is evolving. The way I was treating patients three months ago and the way I’m treating them now is very different,” he said.

“I’m learning new tricks like new compounds, new therapeutics that seemed to work well. I’m using anticoagulation a little bit more. And in select patients, I’m finding a lot of benefit from that.”

Kory said he has been working with doctors worldwide to help vaccine-injured patients. For example, he’s worked with some experts in the UK who can do live-blood analysis in dark-field microscopy.

“The science is ignoring this concept of a vaccine injury syndrome. I will tell you, it is real, and it is common,” Kory said.

“If you look at VAERS, there’s a catastrophic amount of injuries being reported.”

Kory said injuries reported in VAERS are under-reported. “The true number is unknown. But I will tell you it’s unacceptably high, and it’s very common.”

Kory said he has patients who had been injured for over a year without help. Some doctors ended the patients’ visits when they claimed the COVID-19 vaccines caused their illness.

“It’s a very troubling disease that we need help [with]. We need help from the system. We need to organize research. We need more open recognition of the syndrome and more publications. We just don’t have enough data,” said Kory.

The Centers for Disease Control and Prevention (CDC) states that a report to VAERS does not mean that a vaccine caused an adverse event.

Kory said he and other doctors have been attacked for “using unproven therapies” to treat COVID-19 patients or those injured by vaccines.

“There’s no organized effort to try to identify, in a controlled fashion, what’s working,” said Kory. “We’re left trying to doctor the way old school doctors did, by observation, experience, knowledge of pathophysiology, and knowledge of pharmacology. We’re just doctoring.”

“This is how individualized medicine works—the doctor is treating the patient and not treating with policy,” Risch told The Epoch Times in July.

“Doctors have the experience knowing these things work, or they inform the patients that maybe there’s only a 30 percent chance that this will work. They say it’s worth a try if you want to take that risk. That is called informed consent,” said Risch.

Kory said he has been attacked for spreading misinformation, and his medical license has been threatened.

Kory and some doctors have advocated for the early treatment of COVID-19 from the first days of the pandemic. Ivermectin and hydroxychloroquine were among the most prominent medicines they recommended.

“I know the drug works, and I’ve been disseminating that knowledge. Unfortunately, the narrative is that it doesn’t work,” said Kory, referring to ivermectin, one of the safest medicines in history.

“The science around the efficacy of ivermectin has never been more inconvenient to the pharmaceutical and vaccination industry in history.”

Kory said some heavily published trials were used to dismiss the efficacy of those two drugs. The trials were designed to use “toxic amounts of hydroxychloroquine” to show it’s dangerous. As to ivermectin, a different tactic had been used.

“They shortened the duration as much as possible. They started as late as possible. And they gave the lowest doses they could get away with because they wanted to try to show the inefficacy of ivermectin,” said Kory.

Kory said he’s not worried about his license because everything he said was based on his expertise.

Another attack is trying to remove his status as a board-certified doctor, or an expert in a certain specialty. It requires extensive training and passing an exam to become board-certified. The American Board of Medical Specialties (ABMS) is the leader in the nation for physician specialty certification.

It’s “absolutely shocking” that some of the most highly published, evidence-based medicine experts are being accused of misinformation, said Kory.

Kory said the truth would come out soon.

“The ability to suppress the scope and the scale of the vaccine injuries and deaths is starting to slip,” said Kory. “The ERs, the neurologists, cardiologists, oncologists, they’re seeing too many diseases in young people that they’ve never seen before—heart attacks, strokes, sudden deaths, and cancers. And you cannot suppress that. You cannot continue to suppress that.”

Kory said doctors in the system are now openly talking about the vaccines as a cause of injury.

Besides the massive number of adverse events reported in VAERS, 8,808 claims have been made to the Countermeasures Injury Compensation Program (CICP) as of July 1. It is currently the only program to compensate individuals harmed by adverse reactions to COVID-19 vaccines.

Only one claim has been determined eligible for compensation and is pending a review of expenses.

The CDC continues to say COVID-19 vaccines are safe and effective and severe reactions after vaccination are rare.

The U.S. Food and Drug Administration in June authorized emergency use of Moderna and Pfizer COVID-19 Vaccines for children down to 6 months of age.

The mainstream media have largely ignored patients injured by the COVID-19 vaccines. Big Tech has also censored some stories of vaccine-injured people.

On Aug. 3, Kory, McCullough, and Dr. Robert Malone joined a panel on COVID-19 response at Hillsdale College in Washington, D.C. It was led by Sen. Ron Johnson (R-Wis.), an outspoken critic of federal health agency failures and COVID-19 vaccine mandates.

During the panel, Johnson called the Biden administration, the federal health agencies, big pharma, corporate media, and Big Tech a “COVID cartel” that has sabotaged early treatment and censored dissent.

“It has been a colossal fraud, and is exemplified by massive corruption on almost every aspect of COVID,” said Kory.

Kory said that the past two-and-a-half years are a “shocking” example of regulatory capture of health agencies by the vaccination and pharmaceutical manufacturers.

Recently disclosed information showed that Dr. Anthony Fauci and hundreds of scientists at the National Institutes of Health had received royalty payments from pharmaceutical companies. Fauci denied any wrongdoing during a Senate hearing in June.