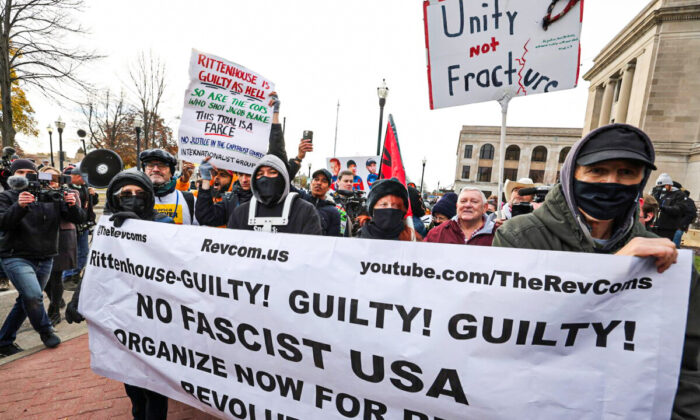 People react to the verdict in the trial of Kyle Rittenhouse, outside the Kenosha County Courthouse in Kenosha, Wis., on Nov. 19, 2021. (REUTERS/Evelyn Hockstein)
Crime and Incidents

Protests erupted in several U.S. cities on Nov. 19 after a jury acquitted Kyle Rittenhouse of all charges in connection with the shooting of three individuals during last year’s unrest in Kenosha, Wisconsin.

People took to the streets in Chicago; New York; Oakland, California; Portland, Oregon; and other cities, to voice their dissatisfaction with the verdict.

Meanwhile, police declared a riot in Portland after a group of protesters damaged property and threw objects at police.

Several dozen protesters assembled at Federal Plaza in Chicago, holding signs that read “Reject Racist Vigilante Terror” and “Kyle Will Kill Again!” Footage shared on social media showed the group marching along a Chicago street, chanting, “What do we want? Justice! When do we want it? Now! And if we don’t get it? Shut it down!”

The demonstrations came after a jury of seven women and five men declared Rittenhouse, accused in the shooting deaths of two men and the wounding of a third on a night of riots and protests last year, not guilty on all five charges on Nov. 19. The most serious charge—first-degree intentional homicide—would have carried a maximum sentence of life in prison.

Rittenhouse shot three men in Kenosha on Aug. 25, 2020. The first man, Joseph Rosenbaum, 36, was advancing on him, and put his hand over the barrel of the rifle held by Rittenhouse, according to expert testimony during the trial. The closest witness said Rosenbaum lunged for the weapon.

Rittenhouse began running toward law enforcement officers but was attacked by several people, including Anthony Huber, 26, who struck Rittenhouse in the head with a skateboard. Rittenhouse then shot Huber.

The third man who was shot, Gaige Grosskreutz, now 28, testified that he pointed a handgun at Rittenhouse when he was fired upon.

After jurors declared Rittenhouse not guilty, Kenosha remained peaceful, though reactions outside the courthouse were mixed. A demonstration had been planned for Nov. 21 in Kenosha.

Gun rights organizations and Rittenhouse supporters celebrated the acquittal as a major victory, while opponents denounced the verdict as evidence of supposed racial bias in the criminal system.

“I believe justice has been served in the Kyle Rittenhouse trial,” Sen. Ron Johnson (R-Wis.) said in a statement.

“Gravely disappointed, but not surprised by the Rittenhouse verdict. Lack of commonsense gun laws and systemic racism infused in the judicial proceedings allowed him to kill two innocent people as they protested peacefully for black lives. Now, he gets to walk free,” he said.

White House press secretary Jen Psaki told reporters that the Biden administration has been in communication with local law enforcement in Kenosha of possible unrest following the verdict.

“While the verdict in Kenosha will leave many Americans feeling angry and concerned, myself included, we must acknowledge that the jury has spoken,” Biden said.

“I urge everyone to express their views peacefully, consistent with the rule of law. Violence and destruction of property have no place in our democracy.”

Jackson Elliott and Zachary Stieber contributed to this report.