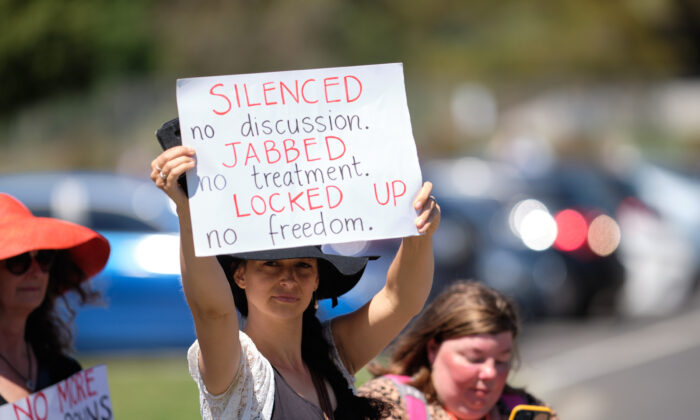 A protestor holds up a sign during rallies against government-mandated health restrictions and impending Pandemic legislation in Melbourne, Australia, on Nov. 2, 2021. (Supplied)
Australia

Protests During the ‘Race That Stops a Nation’

Around 200 Australians have marched from Melbourne’s Footscray Park to the gates of the Flemington Racecourse during protests against the Victorian government’s handling of the COVID-19 pandemic.

The Melbourne Cup, a public holiday in the state of Victoria, was underway at the racecourse, which saw around ten thousand fully vaccinated punters join the festivities.

The group stopped in front of the venue chanting and carrying signs reading, “Kill the Bill,” “No Vaccine Passports,” and, “The freedoms you surrender today are the freedoms your grandchildren will never know existed.” Police monitored the rally.

Protests have become a regular occurrence in the Australian state as residents express frustration with vaccine mandates, lockdowns, and more recently, the impending Pandemic Management Bill.

On the weekend, thousands took to the streets protesting against the Public Health and Wellbeing Amendment (Pandemic Management) Bill 2021, which cleared the lower house of Victoria’s Parliament last week.

The bill will establish a new structure for the government to deal with future pandemics and is supposed to replace pre-existing “State of Emergency” powers provided under the Public Health and Wellbeing Act 2008—due to expire on Dec. 15 and extended twice already.

While the newer bill streamlines certain operational aspects of the government and establishes additional safeguards around privacy rights, it also contains wide-ranging provisions that give the state premier and the health minister unprecedented power over the state.

These include “broad powers” for the health minister to make pandemic orders, on the advice of the chief health officer, where it is deemed “reasonably necessary” to “protect public health.” Further, the premier can “declare a pandemic” and extend such a declaration three-months at a time—the number of extensions is unlimited.

Pandemic orders would give the premier and health minister the power to issue new public health decrees including closing borders, mask mandates, and introducing health restrictions. It would also provide them with the ability to target classes of individuals, even based on vaccination status.

Further, police will be able to enter private premises without a warrant to implement such decrees.

New record penalties have also been introduced including two-year prison terms and fines of AU$90,000 for “aggravated offences” where an individual breaches a health order and is deemed to have caused a “serious risk” to the health of another.

The state opposition leader and peak legal body, the Victorian Bar, have strongly criticised the Bill.

Christopher Blanden Q.C., president of the Bar, warned the Bill would allow “unlimited interference” in the liberties of Victoria’s residents.

“The overriding concern is that the bill confers on the health minister what is, in a practical sense, an effectively unlimited power to rule the state by decree, for an effectively indefinite period, and without effective judicial or parliamentary oversight,” he said in an internal email to Bar members.

“The bill confers powers that can be appropriately described as draconian in authorising virtually unlimited interference with the liberties of Victorian citizens. Yet the bill lacks the appropriate checks and balances to ensure the proper exercise of these powers,” he added.

“This represents the biggest challenge to the rule of law that this state has faced in decades.”