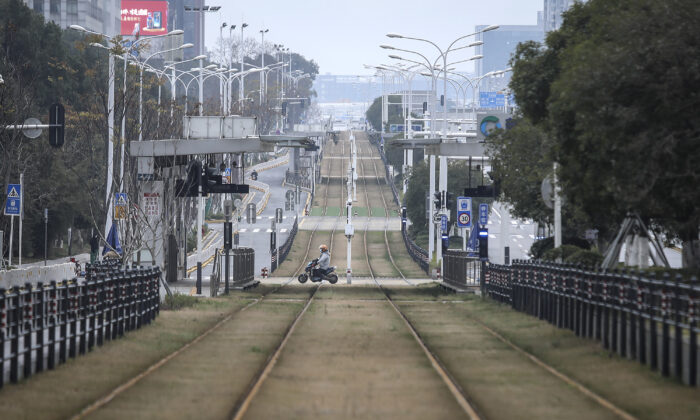 A resident rides a motorbike across an empty track in Wuhan, Hubei Province, China on Feb. 7, 2020. Starting from Jan. 23, 2020, Wuhan was placed under strict lockdown for 76 days. (Getty Images)
INSIDE CHINA

Protests Break Out in Wuhan, Residents Demand Lifting of Lockdowns

Residents in a locked-down region of China’s Wuhan took to the streets on Sept. 4 confronting police and security guards to protest against an ongoing closure of their communities amid a recent COVID-19 outbreak.

Wuhan, the capital city of China’s central Hubei Province where the COVID-19 pandemic first broke out, imposed this latest round of regional lockdowns upon detecting asymptomatic cases in late August.

Panlongcheng, an economic development zone on the northwestern outskirts of Wuhan, was shut down on Aug. 26, the pandemic control command of Panlongcheng said in a notice on Aug. 27.

Residents were banned from leaving their homes; all public venues were ordered closed except government-designated supermarkets and medical institutions; and public transport was suspended, according to the notice.

Panlongcheng is home to multiple large residential compounds and industrial manufacturers, and has a population of over 250,000.

Nearly ten days have passed, but the region is still in lockdown, with no information from the authorities as to when they plan to lift the restrictions.

Video footage obtained by the Chinese edition of The Epoch Times shows residents in multiple residential compounds gathering to protest, chanting: “We demand the lifting of lockdown!” and “We want to have food! We need to pay loans! We have our family to feed!”

Protests against the communist regime’s zero-COVID policies have been seen in a number of cities across China this year, including Chongqing, Beijing, Tianjin, and Shanghai.

The Chinese language edition of The Epoch Times contacted various sources in Panlongcheng, who confirmed that protests did break out in many residential compounds. One of the sources told the publication that over 2,000 people gathered to protest in the three residential compounds of Jun Court, Jin Court, and Yu Court of Caoshang residential complex.

“We want to get back to work because we must pay off mortgages and car loans; we must provide for our children and take care of our parents,” Zhang Qing (pseudonym), a local resident, told the Chinese language edition of The Epoch Times on Sept. 4.

“The pandemic will not kill people, but the difficulties of life will,” Zhang added.

Locked Down Residents Worry About Their Jobs

With the lockdowns being regional restrictions, employees living in locked down regions are beginning to worry that they may lose their jobs as some enterprises in regions that are not shut down have been carrying on with normal operations.

Zhang is one of them. She said she is not able to withstand the high food prices while she is receiving no pay in lockdown.

“My company resumed normal operation last night, but I am still locked at home,” Zhang said.

“I haven’t been to work for more than ten days now. Which boss will pay you for not working for such a long time?” she said, adding that she’s very much worried that her company might just lay her off.

As locked down residents are not allowed to leave their homes, they have had to rely on their neighborhood community committees for access to food supplies, who are supposed to provide residents with a ration of food from major supermarkets on a regular basis.

However, the committees haven’t provided any food to residents in the last ten days, leaving residents subsisting on necessities they’ve purchased themselves from small vendors, according to Zhang, who obtain permission from the committees to access residents. But their prices are really high.

Mr. Fu (pseudonym), a resident of Panlongcheng, told the publication on Sept. 4 that food prices have “more than doubled” as compared to regular prices.

“Fresh markets are closed, and we cannot leave our home,” Fu said. “The vendors who can come into the compound charge high prices for what they sell.”

He added that high food prices are one of the reasons why residents went out to protest.

Residents have criticized local officials for not doing more to assist in the trying situation.

“We are locked down because there is one positive case whose tracing history has to do with our community,” Fu said, adding that as a result, his community has thus been designated a “high risk” area.

The recent lockdown measures in the city were triggered by eight asymptomatic cases detected on Aug. 24 via the regime’s policy of mandatory regular PCR testing, according to the top provincial health body of Hubei Province.

According to a report on NetEase, a major Chinese news online portal, on the morning of Aug. 25 when residents were preparing to go to work as usual, some exit routes of Panlongcheng and the district’s subway stations were closed without notice.

Resident Ms. Xia (pseudonym) told The Epoch Times that the daily PCR test requirement in Panlongcheng and the lockdown have made her anxious.

“We take PCR tests every day, and now we are still shut in our homes,” she said in criticism of the approach to ongoing mass COVID-19 surveillance.

Mr. Fu said he sees no meaning in imposing such stringent lockdown measures as the COVID-19 virus spreads through asymptomatic cases without people even noticing it.

“The so-called dynamic zero-COVID policies make the whole society suffer,” he said, adding that people have had enough of the policies.

“Some people shouted during the protests: ‘The water that bears the boat is the same that swallows it up!’” Fu told the publication, citing a quote from an ancient Chinese saying that advises rulers to treat their people well, as they are the ones that will otherwise overthrow them.

The Epoch Times has not received a response from the Wuhan municipal health committee, the management committee of Panlongcheng, and the local pandemic control and prevention office for comment.