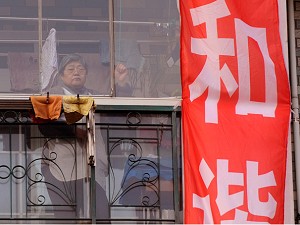 This banner outside an apartment building in the Minhang district of Shanghai protests against the new Maglev train line that will pass within 50 metres of the building. (Mark Ralston/AFP/Getty Images)
China

Thousand of Shanghai residents have been peacefully protesting against a proposed magnetic levitation train (Maglev) throughout the past three weeks.

Official CCP mouthpiece The Jiefang Daily called the demonstrations “street politics,” and accused them of damaging social harmony in Shanghai.

This is the first time since the Tiananmen Square Massacre in 1989 that the Shanghai authorities have reacted on a protest with an editorial article.

A Jiefang Daily editorial titled “Be Good At Listening and Expressing at the Same Time” published on January 15 asked Shanghai citizens to “consider the interests of the whole of Shanghai.” To express their opinions, they “must go by regular channels and strictly obey the law and never take to extreme measures such as these 'street politics.'”

The editorial went on to say that “street politics” “could only damage the stable foundation of the 'harmonious society' and this kind of trend must be prevented. This kind of behavior is illegal and damages public interest, so we need to be clearheaded and firmly against it.”

Since the amendment proposal of the Maglev route going to the airport was made public several weeks ago over a thousand worried residents took to the street joining in the protest. They fear the Maglev that goes downtown would emit magnetic radiation that could hurt their health.

There have been large demonstrations every day since January 1, asking the route to be moved away from residential areas. On January 12, more than one thousand people marched in protest. The demonstration also triggered several violent outbursts from the authorities.

The local media in Shanghai had been keeping a lid on the story until the Southern Metropolitan Daily published the first report. Afterwards, several major media including government-controlled Xinhua, Sina, and NetEase, began reporting and initiated a heated discussion.

Inside sources revealed that the Shanghai authorities, facing this sensitive issue, called urgent meetings to find solutions. The authority sent out an urgent notice forbidding government employees from attending the protest. The Shanghai government-controlled media launched a counter-action, with Eastday.com posting several editorials accusing various media of not being objective or scientific about the issue causing increased disharmony in the city. Xinmin Evening News also ran a number of “scientific” articles about how maglev is harmless.

It is said that the Shanghai Party chief Yu Zhengsheng ordered staff to “be cool in taking care of the issue, take time in planning solutions, and be careful in using police power.”

After The Jiefang Daily published the editorial on the Jan 15th, the authority began to take action. On the 17th, four residents were beaten for attempting to stop the officers from removing protest signs in a yard and two were hospitalized.

Zheng Enchong, a renowned human rights lawyer in Shanghai, and his family have been frequently asked to report to the authorities.

On the 16th, police from the Zhabei District beat Zheng in the morning and had him report to the police in the afternoon. Zheng said the police violent behavior might be because of the continuous protests happen in Shanghai recently.