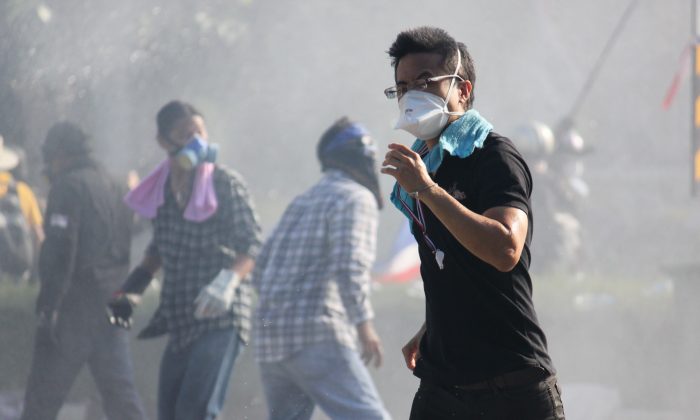 An anti-government protestor flees tear gas and water cannons during a bid to break through a police blockade near Thailand’s Government House on Sunday. (Cameron McKinley/Epoch Times)
Asia & Pacific

Protestors Up the Ante in Bangkok

BANGKOK—Police used water cannon and gas against anti-government protestors who attempted to breach concrete barriers and march on Thailand’s Government House on Sunday.

While their bid to take Government House failed, protestors were able to seize – without the use of force – several other government buildings during the day. These were added on top of others already taken earlier in the week, including the Finance Ministry that is now functioning as one of the current protest bases.

More protests were held outside government buildings – such as the Thai police headquarters in a busy up-market shopping area – but were locked out by barricades and a strong riot police presence.

Four deaths related to the political crisis gripping the Thai capital occurred on the weekend reported the Bangkok Post. The deaths were the results of street clashes between anti-government students and pro-government red shirts.

For most of November, Bangkok experienced a large number of anti-government protests which were initially protesting an amnesty bill that would have allowed former premier Thaksin Shinawatra to return to Thailand and be cleared of criminal charges.

The bill was quashed by a public uproar, but demonstrations continued and shifted their focus to toppling the administration of Prime Minister Yingluck Shinawatra who is Thaksin’s sister.