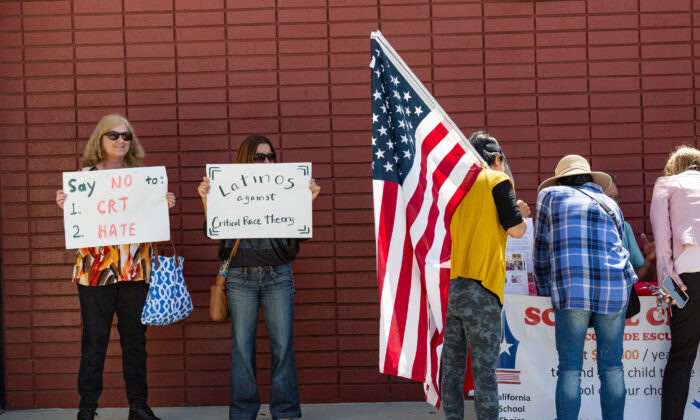 LOS ALAMITOS, Calif.—About 150 protesters gathered outside the Los Alamitos Unified School District on May 11 as the board unanimously voted to implement new social justice standards in classrooms.

Opponents said they were concerned the lessons would teach critical race theory (CRT), an ideology that divides society into oppressors and the oppressed based on characteristics such as race, sex, class, or sexual proclivities.

The district superintendent denied that the new standards would teach CRT.

The rally was held in front of the district office, even though the board met online due to health and safety concerns and recommendations from law enforcement.

Parents gathered from throughout the Orange County region to protest the new guidance.

“They should be teaching facts, not ideology,” Harriette Reid, of Long Beach, told The Epoch Times.

“The anchor domains in the social justice standards are values that the parents should be deciding upon, and not the school. The government schools should be right down the middle.”

Superintendent Andrew Pulver said during the May 11 board meeting that the standards don’t teach CRT, but are a guide for teachers to “shape their lessons into a way that is a little bit more culturally relevant.”

The social justice standards are a set of guidelines divided into four domains: identity, diversity, justice, and action.

The standards were provided by Learning for Justice, formerly known as Teaching Tolerance, founded by the nonprofit Southern Poverty Law Center.

Board president Marlys Davidson said during the May 11 meeting that opposition to the board’s decision is an issue of trust.

“If people remember, you came here because you thought this was a very good place for your children to grow up in,” Davidson said. “Social justice standards and this ethnic studies curriculum—the work that it will include from TK–12—[is] at the heart of what our community needs.”

More than 30 people took to a podium during the protest to share their concerns about the curriculum.

“They’re focused on the narrative, instead of focusing on the truth, and they really should be focusing on academics,” Matthew Simmons, father of two children in the Los Alamitos School District, told fellow protesters.

Simmons cited a recent comment by Pulver in an article by the Los Angeles Times saying that the board intends to “highlight core ethnic studies concepts such as equity, justice and race.”

Simmons said: “Equity is the polar opposite of equality; you can’t have both. We believe in equal opportunity and everybody has the same opportunity, but equity is forced outcome. That is critical race theory.”

He said many parents and students dared not speak out against CRT because of the fear of being ostracized by their peers.

“I understand for the students because that’s not a good situation—they could lower their grades, it could destroy their future if they stand up and take a stand against the teachers,” he said. “But we as parents and we as a community need to stand up and say, ‘We’re against this, and we demand to be heard.’”

Kris Leyvas of Rossmoor said she was taking her grandchildren out of the district because of its “terrible” standards.

“We’re all equal; we don’t need to teach somebody that they’re not equal to somebody else,” Leyvas told The Epoch Times.

Pulver said in an email to parents and faculty, “We have emphasized that we will not engage in ‘white shaming’ or referring to all white people as racist, however, this accusation continues to be inaccurately repeated.”

Steve Amundson, of Long Beach, said CTR was being embedded in public education.

“They’re trying to strip away all of the greatness of America, and say America was founded on racism. And that’s not true at all. We were founded on Christian Judeo principles,” Amundson said.

“We’ve really got to get back to the basic founding principles of this country and teach our kids what they need to be taught in order to remain the world leader in technology, such as math, engineering, and science, and let parents deal with the social issues at home over the dinner table.”

The board of trustees will vote June 1 on implementing an ethnic studies course for grades 9–12.