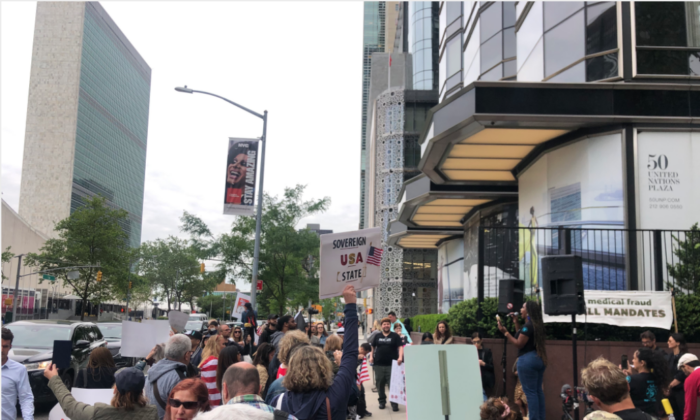 Protestors against the WHO pandemic treaty gather outside the UN building in Manhattan, New York, on May 24, 2022. (Enrico Trigoso/The Epoch Times)
NY News

Protestors Against WHO Global Pandemic Treaty Rally Outside UN Headquarters

NEW YORK—About 100 New Yorkers of varied backgrounds gathered near the United Nations headquarters in Manhattan on May 24 to protest against a global pandemic treaty being negotiated under the WHO.

“New York Freedom Rally hosted a peaceful demonstration outside the United Nations to protest the global pandemic treaty currently being proposed in Geneva, Switzerland. This treaty would grant the World Health Organization the supposed authority to dictate the health policy of any signatory, overriding all national sovereignty without any legislative or democratic due process,” Kevin Peters, an organizer of the rally, told The Epoch Times.

“As a result, we felt there was no more powerful message we could send than to recite the founding documents of our country in front of this unelected parent organization acting as a modern-day imperial monarchy. Their veil has been lifted—as billionaires flying around in private jets demanding that global populations be taxed for their carbon, tracked, and coerced into experimental and harmful medical procedures,” Peters added.

“Were here give one very direct simple, clear message to the UN, the WHO, Klaus Schwab, the World Economic Forum, BlackRock, Bill Gates, Bill and Melinda Gates Foundation, and all their cronies around the world,” Peters said before reading part of the U.S. Declaration of Independence with an amplified sound device directed at the UN HQ.

The WHO already has binding rules known as the International Health Regulations (2005) which set out countries’ obligations where public health events have the potential to cross borders. These include advising the WHO immediately of a health emergency and measures on trade and travel.

Adopted after the 2002–2003 SARS outbreak, these regulations are still seen as functional for regional epidemics like Ebola but inadequate for a global pandemic.

Suggested proposals for the pact include the sharing of data and genome sequences of emerging viruses and rules on vaccine distribution.

“Every human being now and in the future will be negatively affected by this unprecedented, illegal global pandemic treaty,” New Yorker Cat McGuire told The Epoch Times. “There has been virtually no participation allowed from the people to stop this globalist hijacking of the sovereignty of nations. The Davos elite is unelected and unaccountable, and they are being forewarned at protests like this one here outside the UN that we the people will not comply!”

Negotiations are set to continue in June and a final treaty, whose legal status is yet to be determined, would not be ready until 2024.