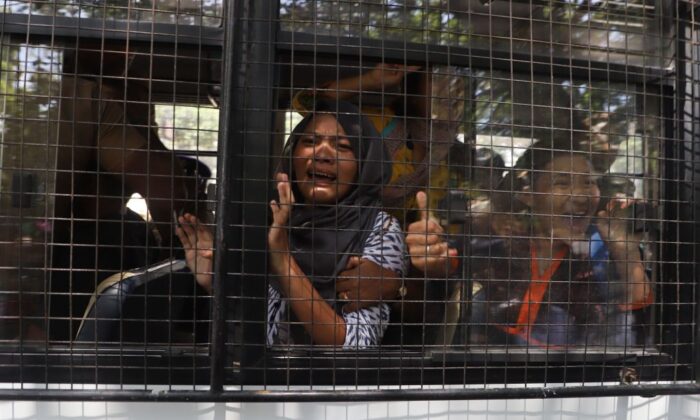 Tibetan students react inside a police vehicle after being detained during a protest against the visit of Chinese leader Xi Jinping near the ITC Grand Chola hotel in Chennai on Oct. 11, 2019. (STR/AFP via Getty Images)
Asia & Pacific

The plight of Tibetans in China and those in exile was highlighted during Chinese leader Xi Jinping’s recent trip to India and Nepal.

Xi arrived in India on Oct. 11 for an informal summit with Indian Prime Minister Narendra Modi, before leaving for Nepal the following day for a two-day visit.

Tibetans in both India and Nepal were arrested by local authorities for planning to hold protests during Xi’s visits to their countries.

In India, at least 15 Tibetans, including 14 students and Gonpo Dhundup, the head of India-based exile group Tibetan Youth Congress (TYC), were arrested throughout the Indian city of Chennai, where Xi and Modi held their meeting, according to an Oct. 11 report by Radio Free Asia (RFA).

TYC, in a statement published on its website on Oct. 11, called on Indian authorities to release the arrested Tibetans, and urged Modi to “take up the issue of Tibet” while meeting Xi, for what it called “70 years of oppression and aggression against the people of Tibet.”

The Chinese Communist Party (CCP) invaded Tibet in 1949, declaring it a part of the Chinese regime’s territory. The Party has since enacted harsh controls over Tibetans’ way of life and branded as “separatists” Tibetans who consider the Dalai Lama their spiritual leader. Amid increasing suppression from Chinese authorities, some Tibetans have escaped across the border to Nepal and India for their religious freedom.

On Oct. 13, Nepal’s English-language newspaper The Himalayan Times reported thati n the past three days, local police have arrested 22 “free Tibet” movement campaigners and human rights activists in the capital of Kathmandu. Among the 22, 11 were Tibetan refugees.

S. Venkataraman, a social activist in Chennai and founder trustee of local nonprofit Nandini Voice for the Deprive, expressed his concerns about the recent arrests.

“Indian government could have allowed them to protest silently. But, it did not allow the protest, which is contrary to India’s democratic traditions and practices,” he wrote, in an opinion article that first appeared on Nepali news site Nepal24hours.

He added: “The cry of Tibetans for freedom should be heard around the world. That would bring moral pressure on China.”

During a U.S. congressional hearing in April, Bhuchung K. Tsering, vice president for Washington-based nonprofit International Campaign for Tibet (ICT), pointed out that the crisis in Tibet had implications for U.S. interests in the Indo-Pacific region.

Tsering pointed out that Beijing aimed to extend its control over Tibetan Buddhist institutions in the Indo-Pacific region with its selection of the next Dalai Lama, which could threaten national security interests of the United States and nearby countries.

Additionally, Beijing’s control of the Tibetan plateau gives it access to the world’s third-largest repository of freshwater. He explained that China could “dictate” regional countries—Thailand, Laos, Cambodia, and Vietnam—because China has built dams on the upper stream of the Mekong River, which originates in the Tibetan plateau and flows through the four countries.

And on Oct. 10, the United States Commission on International Religious Freedom (USCIRF) issued a press release, urging Congress to pass the Tibetan Policy and Support Act of 2019. The legislation would allow the United States to impose sanctions and a visa ban on any Chinese official that interferes with the selection of the next Dalai Lama.

Prior to Xi’s arrival in Nepal, Nepalese local media Khabarhub, citing unnamed sources, reported that Beijing was pressuring Kathmandu to sign an extradition treaty, allowing each country to transfer criminal suspects to the other country.

In June 2018, following Nepal Prime Minister K.P. Sharmam’s visit to China, a joint statement between Beijing and Kathmandu announced that they agreed to negotiate an extradition treaty, for the objective of fighting “illegal border crossing and transnational crimes.”

On Oct.11, ICT issued a statement on its website expressing concerns about the extradition treaty. It stated: “The Chinese government systematically violates basic human rights, including the right to a fair trial, so any extradition treaty with China is highly problematic.”

“Such a treaty could also effectively further jeopardize the situation of Tibetan refugees in Nepal, whose status has been precarious for a long time,” it added.

Human Rights Watch also voiced concerns in a statement on Oct. 11, saying that the agreement could threaten Tibetan refugees, activists, and journalists in Nepal. They could be in danger of facing “unfair trials or the risk of torture and other ill-treatment.”

According to the Nepal foreign ministry announcement, both countries were “satisfied with signing the Treaty on Mutual Legal Assistance in Criminal Matters and expressed hope for an early conclusion of the Treaty on Extradition,” the agreement on “mutual legal assistance” being one of a total of 20 deals signed by the two countries on Oct. 13.

Also among the deals was a memorandum of understanding (MoU) on cooperation between China’s highest prosecutor office and the Office of the Attorney General of Nepal.