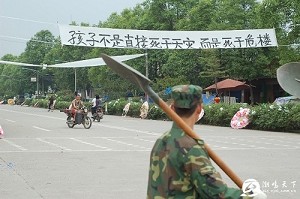 Family members of the dead students hold a banner which reads "Children did not die from a natural disaster but from poor quality construction." (Internet photo)
China

“We all know it's the Tofu buildings that killed the children,” said Fan, a Sichuan resident whose eight-year-old nephew was buried forever in the debris of what used to be Xinjian Primary School in Dujiangyan City. “Tofu” is how the Chinese describe shoddy constructions. “We have petitioned to the educational officers, but they would not respond,” said Fan helplessly.

Fan's nephew was among the over 10,000 children killed by falling school buildings in the May 12 earthquake. Like most other young victims, Fan's nephew was the only child of his parents. For their surviving families, it is hard enough to deal with the grief and despair over the loss of their children, but it is even harder when they found out how poorly the school buildings were constructed.

“Our children were killed by the shoddy buildings made of cheap materials. Many other buildings in this area have survived the quake, even including those previously declared unsafe to live in. But so many school buildings collapsed and took our children's lives,” said Fan.

Angry parents have staged protests to demand justice, but the authorities responded with only efforts to silence them. Security forces have sealed off school sites to keep out parents who want to pay tribute to their dead children.

According to Fan, right before June 12, the one month anniversary of the quake, armed forces blockaded roads leading to all collapsed schools in Dujiangyan, including Juyuan Middle School where hundreds of students died, and Beichuan Middle School where more than 1,300 students died. Parents of dead Juyuan students planned to gather on that day at the school site to mourn the death of their children, but police found every one of them and warned them not to do that.

Parents of middle school students are more desperate, said Fan, because most of them are too old to have any more children. Middle schools, therefore, are more heavily guarded these days.

“Our purpose is to expose the murderers responsible for this tragedy,” said Fan. “Since local authorities wouldn't help us at all, we decided to appeal to higher authorities.”

Yi , father of a dead Xiang'e Middle School student told the reporter that some other parents were arrested on their way to petition to the government. Of the 400 plus students of the school, he said, only twenty to thirty survived.

Yi said the parents are all in despair. “We are only helpless peasants. We have no idea what will happen to us. The tragedy happened because of not only shoddy constructions but also insufficient rescue efforts. The rescue force arrived at the scene too long after the earthquake.”

The authorities have provided small payments to the students' parents, but parents would not claim the money. Fan said, “The government offered us a monthly compensation of 100 yuan (US$ 14.5) for each dead student. No parent took it. What good is the money while our kids are gone?”

“The money is not the important thing to us,” she continued. “Not even one million yuan can get our children back. If the buildings were up to standard, they wouldn't have fallen and killed so many. It was not just a natural disaster.”

“If the local government refuses to investigate the truth, we will continue to appeal to higher authorities.” said another parent, whose 11-year-old was killed also in Xinjian Primary School along with over 30 classmates. “Our children were killed by the Tofu buildings. About 90 percent of the dead students were only-children. We want no money. We only want the government to tell the truth and have justice done.”

According to Fan, over 300 students died in Xinjian Primary School, but the authorities admitted to only 200. “Besides,” she said, “those who are still buried in the debris are counted as missing, so the actual death toll is still unknown.”