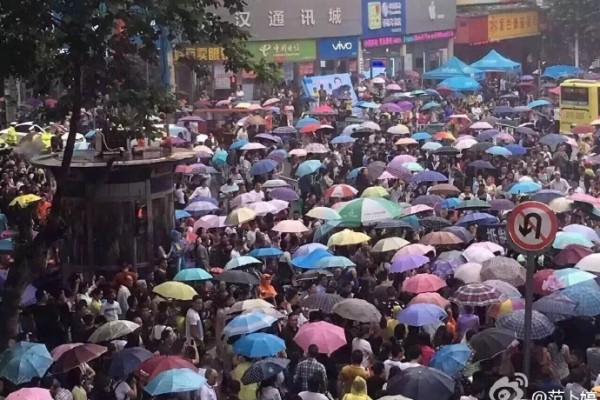 Crowds of protesters in Xiantao, Hubei Province, protests against a state-backed plan to construct a waste incineration power plant. (via Sina Weibo)
China

Local authorities in Hubei Province, faced with tens of thousands of demonstrators protesting the proposed construction of a waste incineration facility near their community in the town of Xiantao, dispatched legions of riot police to violently suppress the mass gathering.

Radio Free Asia (RFA) reported that on June 25, locals in the village of Zhengrenkou, in Xiantao, held banners and shouted slogans like “return my beautiful land to me” and “protect the town of Xiantao” while parading through the streets.

The proposed plant, a joint project by state and private developers, would generate power by burning toxic industrial waste. What concerns locals is that it would be located just three miles from major residential and commercial areas.

“The power plant would be too close to the downtown area,” said a local woman surnamed Wang in an interview with RFA. “The pollution would be too strong, so everyone living there went out to take part in the demonstration.”

According to Ms. Liu, a resident of Xiantao who spoke with Epoch Times via telephone, close to 20,000 people took part in the demonstrations on June 25. There was relatively little confrontation with the teams of police following their movements, but some arrests were made and a handful of people, including pregnant women and the elderly, were beaten.

The situation escalated the next day. Two thousand riot police in full gear were deployed to Zhengrenkou from Wuhan, provincial capital of Hubei, and the tens of thousands of demonstrators blocked a highway entrance.

The mayor of Xiantao appeared at the highway at around 10 in the morning, and claimed throug a loudspeaker that construction of the waste incinerator was suspended. At this, the protesters called loudly for the release of those who had been detained the previous day.

With the conclusion of the mayor’s statement, the riot police moved to clear the road, indiscriminately attacking the crowds with truncheons and fire hoses, according to locals. In a day-long battle that dragged on until about 11 p.m., the civilians responded by pelting the police with eggs and water bottles.

Limited video clips shot at the scene were uploaded to the internet before electricity was cut off from the locality. The clips were blocked by the authorities, but preserved on non-Chinese websites.

Ms. Liu said that the demonstrators doubted the sincerity of the mayor’s statements, and that they were prepared to organize even bigger protests if construction of the 250 million yuan (about $38 million dollars) incinerator were restarted.