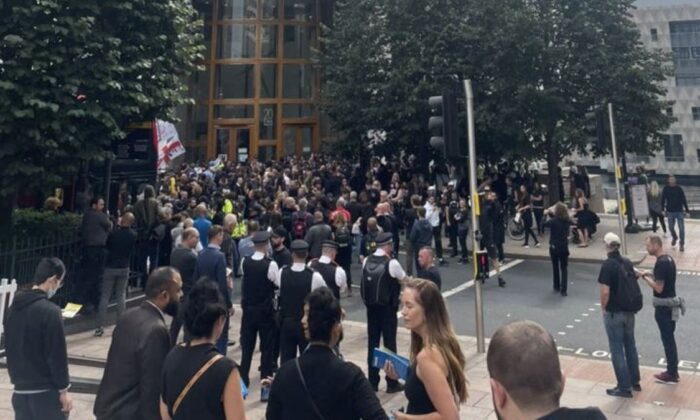 A group of protesters outside of the MHRA headquarters in central London, where police blocked them from entering, on Sept. 3, 2021 (Andrew Wood/Twitter/PA)
UK

A group described as anti-vaccine protesters tried to force their way into the London headquarters of the national UK medicines regulator that approves COVID-19 vaccines.

The Met police said that the protesters later became violent towards officers.

In various footage posted to social media on Sept. 3, dozens of police drive back a crowd of demonstrators who are trying to get through the doors of the building on Cabot Square in Canary Wharf.

That building is the headquarters of the Medicines and Healthcare products Regulatory Agency (MHRA).

Some footage and messages on social media suggest that the group was protesting against the vaccination of children. One local councillor who was on the scene described them as “anti-vaccination anti-Covid rules.”

The protest came just ahead of a long-anticipated recommendation by another official body on whether healthy 12–15 year-olds should be vaccinated.

“We have officers attending a demonstration outside a commercial building on Cabot Square in Canary Wharf,” the Met Police said on Twitter, at about 2:00 p.m. “A number of officers are on scene, guarding the entrance to the building.”

About an hour later, the group moved off to another location, where the Met said a number became violent towards police officers.

“Four of our officers have been injured during clashes,” said the Met Police in their latest update at around 3:30 p.m. “This is unacceptable. We remain on scene. Updates to follow.”

Police said that they had made arrests at a “demonstration by a separate group in Canary Wharf along Bank Street.” However, it appears that those arrested belonged to a protest by Extinction Rebellion.

Andrew Wood, councillor for Canary Wharf, who was on the scene and taking photos which he shared on Twitter, said leaflets were being handed out about the vaccination of children at the protest at the MHRA headquarters.

“Just to make clear protests this afternoon are anti-vaccination anti-Covid rules not XR Rebellion (who were here this morning for a separate not disruptive protest),” he wrote on Twitter.

The incident came just as another official body, which was set up to make recommendations on COVID-19 vaccinations, said that the government should not vaccinate healthy 12 to 15 year olds.

Last week, a group of demonstrators occupied the entrance of the headquarters of ITV News and Channel 4 News in London, claiming that the media are misinforming people about vaccines and the pandemic.

Police were called to the ITN (Independent Television News) production studios in central London on Aug. 23, according to the Met Police, after a group “unlawfully gained access to the building.”

Several times in the past few months, groups have peeled away from broader large-scale protests against pandemic measures to protest outside media premises. Last month, a group of protesters similarly sought out a broadcast building once headquartered by BBC News, and used now to host other broadcasts.